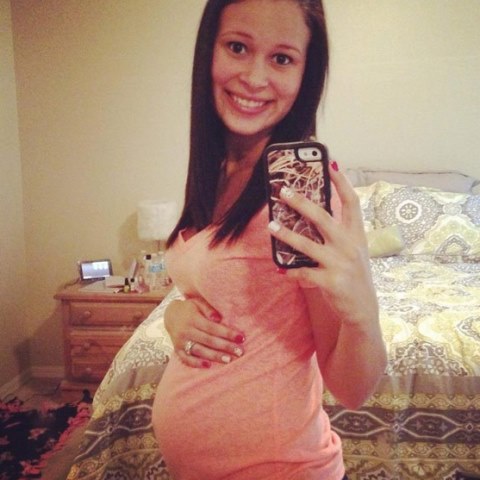 Jennifer Del Rio gave birth to twin boys on MTV’s hit show “16 & Pregnant” and now the former reality star has shared a photograph of herself six months pregnant with her third child. Jennifer is recently married to a new man and has decided to keep most of her life private and away from the public eye, especially since so much of her relationship with her twins’ father, Josh Smith was aired on MTV. Initially after filming “16 & Pregnant”, Jennifer said that she felt “unsafe” because of the tumultuous relationship she and Josh shared, so she uprooted the boys and moved across country to raise them by her aunt.

Three-year-old twins Joshua and Noah are excited to be welcoming another baby boy into the family. Jennifer’s pregnancy hasn’t been uneventful as she has been in and out of the hospital on multiple occasions due to numerous urinary tract infections and kidney stones unrelated to her pregnancy. Jennifer also revealed that although she and her husband had hoped for a little girl, they are happy to report that their son is healthy and that they’ve decided to name him Sebastian. Congratulations to Jennifer and her husband! What are your thoughts? Post your comments below.