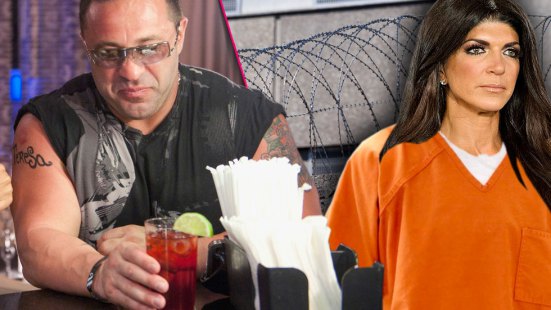 While Teresa Giudice is preparing for prison in two months, her husband Giuseppe “Joe” Giudice has been seen frequently their hometown’s bars. Joe has been allegedly visiting the Towaco, New Jersey’s local bars and drinking at night after publicly admitting to having a drinking problem. While appearing on Andy Cohen’s Watch What Happens Live, Joe openly admitted to drinking between one and three bottles of wine A NIGHT. A source close to the celebrity couple reveals:

“Joe is spending as much time as possible out of the house. There are one or two places in Rockaway he likes to go to because he doesn’t get bothered, and other patrons often buy him drinks. He is most often alone, or with one or two guy friends. Teresa is never with him. He just likes to hang out and watch football games, or just shoot the sh**. Teresa might be putting on a united front with Joe publicly, but it’s all a sham. Teresa will absolutely file for divorce from Joe once she is done serving her prison sentence. It’s really sad.”

The Real Housewives Of New Jersey stars were charged with dozens of counts of federal fraud, tax evasion, and mail and mortgage fraud. They garnered a plea deal and plead guilty for a much lesser sentencing. Joe will serve 41 months in prison while Teresa will serve 15 months. Teresa will serve her time first, turning herself over by January 5th. Joe will serve immediately after Teresa so that someone can be at home with the couple’s four daughters at all times. Following his jail sentence, Joe could face deportation to Italy. What are your thoughts? Post your comments below.