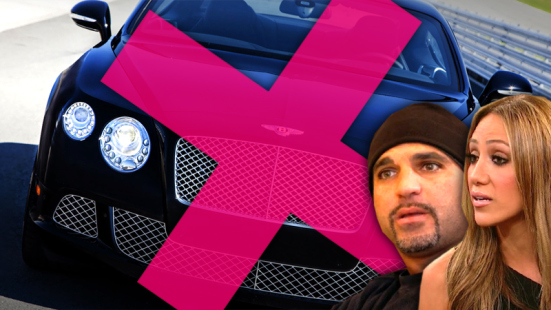 On a recent episode of the Real Housewives Of New Jersey stars Joe and Melissa Gorga were seen to be taking Melissa’s Bentley to have the bumper fixed after she hit it once again. According to Radar the couple recently was forced to give up the car because they could no longer afford it.

“The Bentley was leased by Joe and Melissa, and was strictly done for the show. They felt pressure to make their lifestyle appear to be something it definitely wasn’t. The lease was just too expensive at $5,000 a month, and they had to turn it back in early,” a source claims.

Because of the exposure they gave the dealership, the couple “was given a free used Mercedes by a local car dealer, in exchange for shooting scenes at the dealership. The scene in which Joe shows Melissa their new trash truck was filmed at the Mercedes dealership. The sad thing is that what Melissa doesn’t recognize is that [that kind of behavior] is what got Teresa into trouble with the law!” the source continues.

Dina Manzo Betraying Teresa Giudice By Telling Her Secrets To Others