Outside the federal courthouse in Newark, N.J., defense attorney Miles Feinstein dismissed as “ludicrous” any suggestion that the husband, who faces deportation to Italy if convicted, might turn on his wife.

Minutes before the couple’s arrival, Joe Guidice’s attorney said the 43-year-old defendant has no plans to testify against his wife, refuting other media reports.

“We’re confident they’ll be vindicated. They were relieved that they could stand up in court, through their attorneys, and say ‘not guilty.’ Wer’e confident we’re going to put on a very strong defense and I have a lot of confidence in her,” Feinstein said.

The couple, who have four daughters, are charged with using fake pay stubs, tax returns and W-2 forms to secure nearly $5 million in loans.

Joe Giudice is also charged with failing to file tax return for five years and Teresa is accused of hiding her income from the Bravo reality series that showcases her lavish lifestyle and from other business ventures when the family applied for bankruptcy.

During a five-minute hearing, they waived the reading of the charges and entered not guilty pleas on all 39 counts. They are set to return to court Oct. 3 and go on trial Oct. 8. 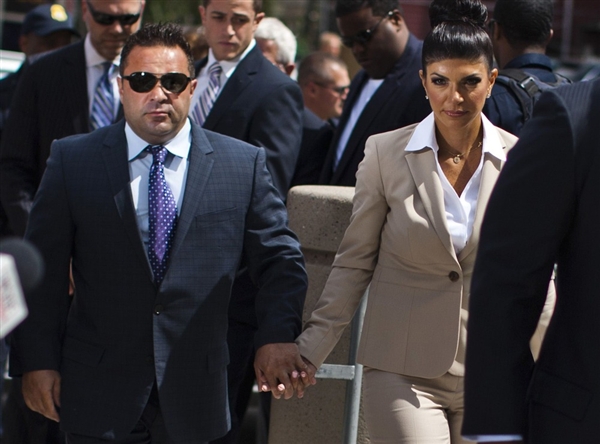 The pair Joe in a dark suit and Teresa in a beige ensemble and topknot strode into the arraignment calmly and quietly. That was a far cry from their first court appearance last month, when Joe Giudice clashed with a cameraman.

The lawyer for Joe Giudice, the husband of ‘Real Housewives of New Jersey’ star Teresa, addresses his client’s actions in July 2013 when he took a swipe at a photographer’s camera outside the federal courthouse in Newark, N.J.

The children of “Real Housewives of New Jersey” stars Joe and Teresa Giudice are “very supportive and loving … and holding up well,” according to lawyer Miles Feinstein.

“It wasn’t intentional. The camera’s right in his face. That was an aberration [and] people should not judge that.” Feinstein said about the confrontation.

He said he did not know how the case would affect “The Real Housewives of New Jersey,” but the Giudices plan to attend a reunion show at the end of the fifth season of the show that chronicles the dramas of five sometime-friends from New Jersey. Teresa wasn’t missing a beat in promoting her sidelines, either. Her lawyer said she planned to keep a date to sign copies of her cookbook, “Fabulicious” at a New Jersey boutique hours after the court appearance.

In September 2001, Teresa falsely claimed in a $121,500 mortgage application that she worked for four years at Modern Era Investment Corp., earning $3,750 a month, according to the indictment. Prosecutors contend she actually was unemployed from January 2001 to 2008. Meanwhile, Joe also failed to file tax returns for 2004 through 2008, when he is alleged to have earned nearly $1 million. And Joe also obtained fraudulent construction loans of about $800,000 and $1.7 million, according to the indictment.

Conviction on all counts could send them both to jail for up to 50 years. And because Joe, whose real first name is Giuseppe, was born in Italy and is not a U.S. citizen, he also faces deportation.

Wow. Joe didn’t know he wasn’t a citizen? What does it say on his passport? Place of birth – USA? I don’t
believe that, he is lying. What are your thoughts? Post your comments below.

Teresa Giudice Speaks Out About Fraud Charges: ‘Insult Me, Make Fun Of Me (But) I’ll Keep Being a Good Little Girl’