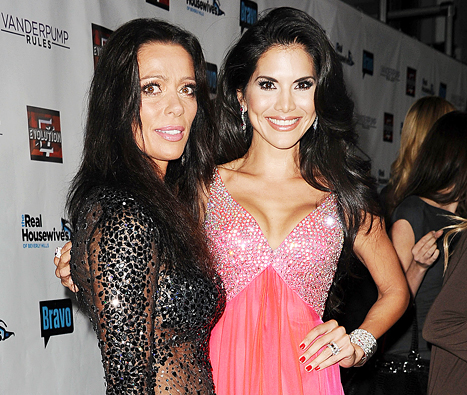 Real Housewives of Beverly Hills stars Joyce Giraud and Carlton Gebbia have been fired after only one season. Joyce is married to producer Michael Ohoven and is mother to two children Valentino and Leonardo Ohoven. She was the perceived beauty queen on the show. Carlton was the Wiccan who was categorized as a witch by many. Her story line revolved around her practicing Wicca and building a “red room” with a stage for her husband. A show insider reveals: “Decisions were made and Joyce and Carlton have been informed that they’re not coming back.”

At the time they were hired, Joyce and Carlton replaced Adrienne Maloof and Taylor Armstrong. They joined former housewives Kyle Richards, Lisa Vanderpump, and Brandi Glanville. Carlton and Kyle bumped heads on multiple occasions throughout the season while Brandi and Joyce did not get along. Joyce is reportedly already working on another television venture though the details have not been confirmed. Their replacements have not been confirmed yet, though celebrity Denise Richards has been very vocal about her want to be on the show. Will you miss Joyce and Carlton? What are your thoughts? Post your comments below.

More in Real Housewives Of Beverly Hills (387 of 806 articles)