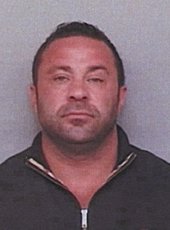 impersonation charges. Joe is facing 10 years in jail for using his brother Pietro Giudice’s marriage and birth certificates to obtain a driver’s license with his picture and his brother’s info at the New Jersey Motor Vehicle bureau, all while his own drivers license was suspended.

Joe, 40 was indicted on December 20, 2011 by a grand jury and charged with fraudulently obtaining a driver’s license in his brother’s name. He was charged with one count of impersonation and one count of wrongfully using identifying information of another. The plea deal would have capped his sentence to 5 years. The charge of wrongfully using identifying information is punishable by up to 10 years in prison. The impersonation charge carries a maximum 18-month prison sentence.

Juicy Joe can’t go to jail! But looks like he may, unless the celebrity gremlins work their magic for getting celebs off.