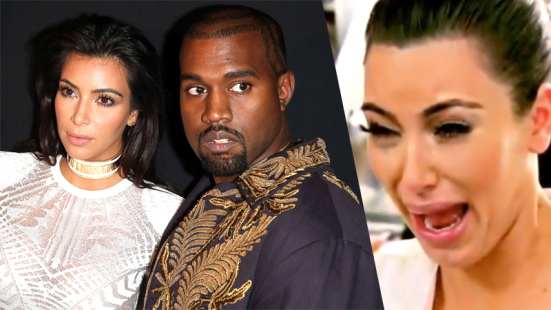 A new report claims that Kanye West had a major blow out fight with his wife Kim Kardashian when he heard that his wife’s nude selfies had been leaked. Kim’s naked, sexy photographs were apart of the second wave of photos of celebrities released after being hacked and uploaded. A source claims:

“Kim had a blazing row with Kanye after he found out about the pictures. He loves seeing her in sexy outfits  like she wore in Paris last week and often posts sexy selfies she’s taken, but he’d never seen these photos before and think Kim must have taken them before they got together, for an ex-boyfriend. He was seething with jealousy and angry that he has no control over who can see the images. He even accused Kim of still being in contact with some of her exes.”

The couple, who wed in May, are currently attending multiple fashion shows at Paris’ Fashion Week with their 15-month-old daughter North and Kim’s “momager” Kris Jenner. 33-year-old Kim attempted to calm her rapper husband down after he found out that the photos included a full frontal nude shot of her. Kim made it absolutely clear to Kanye that she hasn’t been in touch with any of her past lovers. The source continues:

“Kim reassured him that she hasn’t and has been in tears about the whole thing. She’s tried to calm Kanye down and asked her legal team to have the photos removed from as many online sites as possible. Kanye knows it’s not Kim’s fault, but he’s still upset. He’s been trying hard to steer Kim’s career and rebrand them as a power couple and he doesn’t want anything to damage that. She’s scared he could leave her because they haven’t been getting [along] recently and this has been a huge blow.”