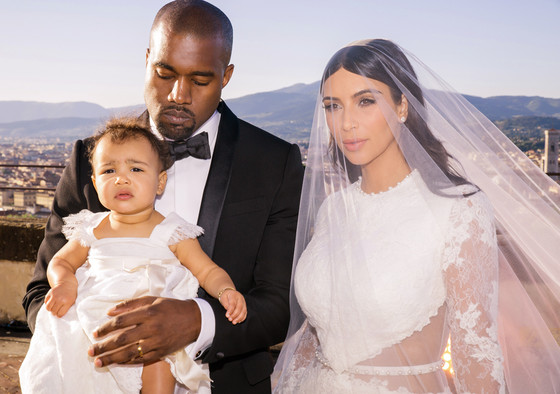 Kim Kardashian West married rapper Kanye West on Saturday, May 24th in Florence, Italy. Two days after her ceremony, she set an all-time Instagram “like” record when she uploaded a photograph of herself kissing her new husband. Now, three more photographs from her wedding album have been released. In the first, Kim is seen walking alongside Kanye who holds their eleven-month-old daughter North. The photograph was taken on the roof of the Forte di Belvedere where the ceremony took place. 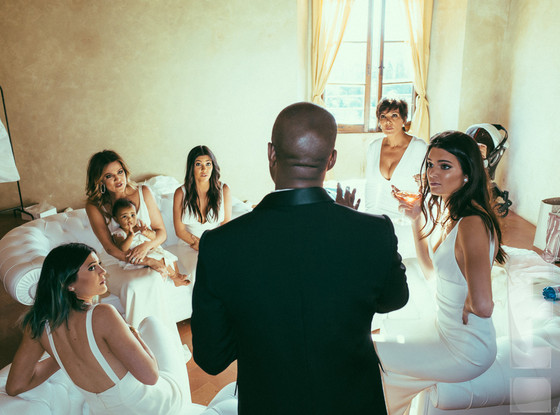 In the second photograph, Kanye is has his back to the camera as he talks to Kim’s bridesmaids and “momager” Kris Jenner. Kendall and Kylie Jenner, Kourtney and Khloe Kardashian are seen wearing plain, white dresses.  In an interview after the wedding Kendall said: “We just wore some simple pretty gowns that Kim and Kanye picked out.”

Khloe: “The image was taken right after Kim and Kanye wed. We were all discussing how calm and dream-like the wedding was. The peace in Kim and Kanye was undeniable. We all felt as if they had been married in another lifetime. I have always believed these two are soul mates.”

Kourtney: “It was right after they said their vows and we all came back to the fort. This picture is beautiful. Every moment was like a fairy-tale dream come true.” 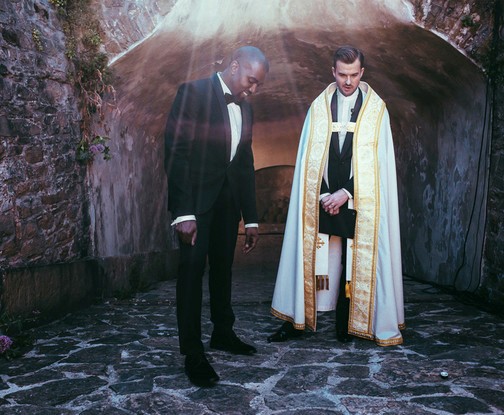 The third photograph shows Kanye anxiously awaiting his bride with his pastor Rich Wilkerson Jr. Following tradition, Kanye and Kim did not see each other the night before the wedding. Kanye and Kim are currently enjoying their “formal” honeymoon in Mexico before celebrating Father’s Day and North’s first birthday on Sunday. What are your thoughts? Post your comments below.

Kim Kardashian Dedicating An Entire Room To Her Behind