Kathryn Edwards: “My Heart Is In The Right Place” 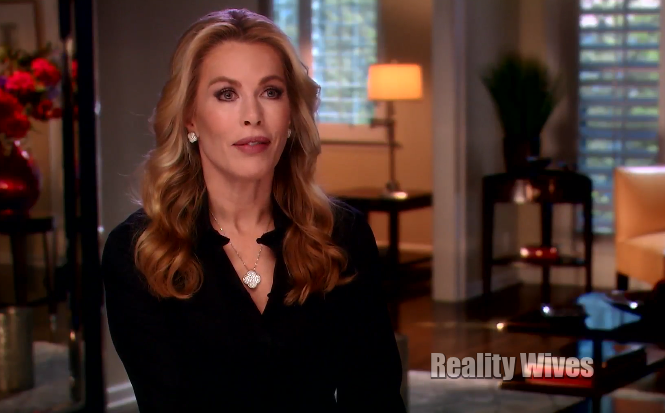 These are the facts.

Erika did use the word “web.” You didn’t see it, but she said it and even she acknowledged it. I’m not sure if it was “Vanderpump spins a web,” “don’t get caught in her web” or some other line, but the web word was used.

Much of the dinner conversation was not seen–most likely because it was long–but the truth is we all started off joking with each other, and were having some fun laughs.
Right after Erika introduces me to Tom, you can see her and I hug each other with smiles on our faces. I had no idea she was mad at me. She hadn’t picked up the phone, texted me or reached out in any way after the Wally’s dinner to let me know she was upset. Had I known, I would have made sure we talked it out before the dinner at her home. Why invite me if you are so unhappy with me?
I much prefer to be upfront and say what I have to say to someone’s face, but as we have all seen, that is far from the way Erika does business.

What you didn’t see was more than half of the reason I was so animated and brash. We talked about the web comment in detail and my point was more about why Erika felt the need to warn me about Lisa VDP.
Here is the person of distrust, Lisa VDP, sitting right in front of Erika…talk to LVP, speak your mind. You think she’s dangerous like a “sniper,” you felt the need to warn me about her.
Lisa VDP asked her why she said it and rather than addressing Lisa, Erika turned to me with it and that’s when it started. I wasn’t tipsy, I was passionate about what was being said and being truthful to my feelings.

When I said that I was also looking for a reaction, yes…sure, I was. Give us something to either like or dislike. I hadn’t had many conversations with Erika other than daily minutia.
As I said many, many times, I went about it wrong…I should have handled it waaay differently, I wish I would have, but in my humble opinion, the crime doesn’t fit the punishment.

When I teased Lisa Rinna about not eating, it was all in fun. I do not think for one second that she has an eating disorder of any kind. She has an absolutely amazing body and has always been in phenomenal shape. Don’t forget that I’ve known her for many years, we used to workout together. If I really thought that she had issues, I sure as hell wouldn’t tease her. It was a joke, and I wasn’t aware that it was such a hot spot for her because of Kim Richards. I know now.

Fast forward to our Habitat for Humanity event. I LOVE doing things like this. This felt so good, and everything about this event was wonderful. People coming together for the greater good of helping others. Kudos to Mauricio, Kyle, The Agency and Habitat for Humanity. I will make sure this becomes something I do on a regular basis.

FINALLY! The makeup between Erika and I.