Kathy feels Teresa went too far by bringing up her marriage and her father.

On Plastic Surgery
Some big secrets were revealed on Sunday evening. Obviously this was a very tense situation as we haven’t been all together for a year. It was bound to be intense, emotional, and passionate. I didn’t even get a chance to settle in when Andy Cohen called me out on my 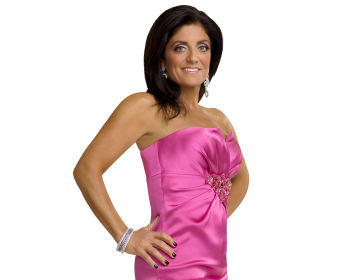 nose job right at the start! You can’t believe how many tweets I’ve received over having my nose fixed. Interestingly, it’s really no big deal for me. I never tried to hide it, but quite frankly it wasn’t something I chose to do while we were filming. I know some ladies choose to have procedures as part of their story line, and I commend them for it. However it just wasn’t what I wanted at this time. Andy has asked me numerous times on camera, and I’ve told him I did it for cosmetic reasons, which I’ve never denied. I just wanted the youthful look I once had, and I did not blame it on any medical issues.

The decision to plump up my lips was so last minute. I was having a facial and decided to give it a shot. It was only 10 days prior to the reunion, so it was fresh but they’re not permanent. In fact they are already back to the way they were before. I think the big reaction from everyone was caused by a combination of the nose, lips, the extra glam makeup, and the lighter hair. Oh and I can’t forget the extra-long hair extensions. That’s one of the great things about being a girl, one day I can do a little more primping and prepping for an event and the next day go back to my apron and ponytail. That was my favorite part of working in the beauty business, the endless possibilities.

Another big dark secret — you all found out that I’m such a bad person, because I didn’t have my first designer handbag until I was 40 years old! Guilty! It wasn’t something that I really wanted. (If it was, don’t you think that Richie would have gotten them for me?) I guess my priorities are little different than some. For me, having our family’s future secured and investing in my children’s college education was just more important.

On Teresa’s Comments
I heard what Teresa had said about me behind my back from several different people, and I never wanted to believe it. She told people that I lived in a “sh—- little house,” and I could not believe it until I actually saw it in print from an interview that she gave, that makes a similar reference. She didn’t even deny that she said these things at the reunion, when she had denied it numerous other accusations. For the record, I’ve always been thrilled with my home. Love lives here. However, everyone has a right to their own opinion.

Now on to much more serious things. First of all, I want to go on record that I’m not proud of the dark place that I went to when I lashed out at Teresa. It’s not in my nature to allow myself to react so harshly, and I feel bad about my behavior. I will always be accountable for my wrong-doings, as I have in the past, and I will continue to do so. Unfortunately, this time I reacted after Teresa had pushed me to my limit. How many more chances and benefits of the doubts am I going to give her? There are a few things that I hold sacred in my life: my children, my family, and most of all my marriage. You have all seen that of these things, my marriage is the basis of my life. How dare she try to pick away at my marriage and then throw her mother under the bus and say that she is the one who told her this? Why would she betray her mother’s confidence and get her involved in this? A lie is a lie. Trust me, if the Pope himself was spreading lies about my marriage, I would still do anything to stop it.

I sat back for two seasons straight and did not allow Teresa’s jabs and insults about my character to get to me, because I knew what she was trying to do. It’s called deflection. She has attacked the most important relationships in my life — my sister Rosie, made comments about my kids, and now my marriage and my deceased father. The ironic thing is, the week this episode aired Richie and I had just celebrated our 21st wedding anniversary. So viewers, how is what she is saying relevant now after 21 years of a solid marriage? Why would she even bring that up at this time?

On Her Father
I’m going to give you a little background. My father was the first man that both Rosie and I had ever loved. My father came to this country partially handicapped at a young age, not knowing the language. He worked incredibly hard in spite of his disability to make a life for himself. After he married my mom, they both worked selflessly to make a life and provide for their five children. They learned the language, they kept to themselves and were honorable, hardworking people who were respected by everyone. My father lived and died for his family, as well as his extended family. He never cheated anyone or hurt anyone. Anyone who knew him would say the same. He was an honorable man, and I will not let anyone disrespect his reputation or his memory.

When my father got sick with leukemia, our family watched him suffer for over seven years until he came down with lung cancer. At this point, we really watched him deteriorate. I was there with my mom as much as I could be during the day, but Rosie lived with them and watched day in and day out as my father slipped further and further away. Until you live with the pain of watching a loved one, especially a powerhouse like your father, suffer so severely, you can’t know what the pain feels like. Even though it has been almost ten years, the wound will never heal. There’s not a day that goes by that we don’t think of him and miss him. When Teresa’s insinuations about my father’s love for us, his own children, came out, that’s when she hurt Rosie and me the most. This brought both of us to a very bad place. It does not excuse or justify our actions, but we are all human, and everyone has their breaking point. I hope that watching the next parts of the reunion will shed a little bit more light. That’s all for now.