Kenya more spoke to OK Magazine about her relationship with Walter and her cast mates on the Real Housewives Of Atlanta. Kenya claims she dumped Walter, after his allegations that their relationship was fake and only for TV, as she wanted a man on the reality show. He also states they dated three years ago for 3 months. I hope that Walter is available and is invited to the Atlanta reunion. Kenya had previously stated she was humiliated by Walter’s lies about their relationship.

OK: You and Walter have split up – how do you feel now the relationship is over?
Kenya Moore: I feel relieved. No one should settle for a relationship for the sake of being in one. Once I move to Atlanta the relationship was flushed out. I saw Walter for who he really is and his intentions were false. I’m glad it’s over. 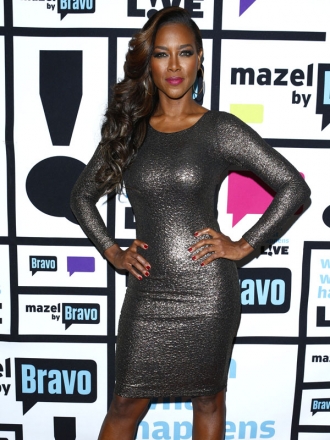 What is the status of your relationship with him now – are you in contact?
No, we are not in contact. He was not a good person to me.

You were emotional talking to your aunt about the whole situation – do you feel very let down by Walter?
Relationships don’t work out all the time. But I felt deceived because he was not truthful with me.

Walter had a bad attitude during your fishing trip – was that the final straw for you?
By that time, I had already made up my mind that the relationship was over. The fishing trip was final closure for me.

Do you feel you wasted your time with Walter and should have terminated the relationship a long time before you actually did?
I can only blame myself because I saw the red flags with Walter and ignored them. I have been proposed to 6 times prior to Walter and never accepted because I wasn’t ready. Now that I am, I wanted to make sure it wasn’t me running away like I’ve done in the past.

When you look at how relaxed and laid back Kandi is dealing with her relationship and the marriage issue – do you wish you had handled things differently with Walter..
I wish Kandi and Todd well and hope they continue to be happy with whatever direction their lives take them. I don’t go backwards only forwards with my actions.

Your aunt said to use your intuition – did you deep down know the relationship wasn’t going to work out but felt pressure to make it work because of your age and wanting to start a family?
Moving forward I will listen more to my intuition as my Aunt has suggested. I would say that my age in having children is an absolute factor in wanting to have a permanent relationship. I have never wanted to do it alone and highly respect the single mothers that have tried to make it work.

What do you think Phaedra Parks meant when she said Walter seemed to ‘enjoy’ the company of the husbands more than your company?
Well… it’s hard to figure out what any of these women really mean.

Nene and Greg recently got engaged – what are your thoughts on them heading up the altar for a second time?
I’m truly happy for them. I love that they can get to a place where they can have full acceptance of one another. It’s a beautiful thing.

Can you believe Nene is a Grandmother – what do you think of her not wanting to use that term and being called a Glammother instead?..
It’s classic Nene!

Were you surprised that Porsha and Kordell don’t have a pre-nup? Would you want a pre-nup with your future husband?
Presumably Kordell made the bulk of his earnings prior to marriage seeing that he retired from the NFL over 8 years ago. In most State law, the wife would not be entitled to previous earnings, only community property which is what is accumulated during the marriage. In my opinion, it’s smarter on Kordell’s part not to have one. I would absolutely have a pre-nup it protects both parties should the marriage be dissolved and makes any propensity or opportunity for financial gain transparent.

Do you think it is irresponsible of Porsha to buy things without even looking at how much it costs?
I admire Kandi who I think is an incredible business woman and is successful. When you do spend you should be mindful of a budget because that’s how you keep wealth. But, when you aren’t spending your own money I guess it’s easy not to care what it costs.

What did you think of Porsha calling you evil? Do you think you two can ever be friends?
I say never say never. I believe at this point there has been too much bad blood too soon for a friendship to develop.

Was it crass of her to say people only say you look like Beyonce to get into your panties?
It was crass as well as hateful yet not surprising.

Phaedra recently announced she’s expecting her second baby – are you feeling the pressure to have a child and what are your plans to make your dream of having a family happen?
I’m happy for Phaedra and Apollo. I will have children and a family in Godspeed, not my own.

Have you tried out your Bedroom Kandi yet?
HA! Wouldn’t you like to know.

You recently said you were the new star of RHOA – what are you hoping to achieve with this new platform?
I actually said I MAY be the new star. With that said, I’d love to use this platform to encourage women to be independent, entrepreneurial, and brave… all things I believe I am on the RHOA. And of course… Gone With the Wind Fabulous!

This was an interesting read. What are your thoughts? Post your comments below.