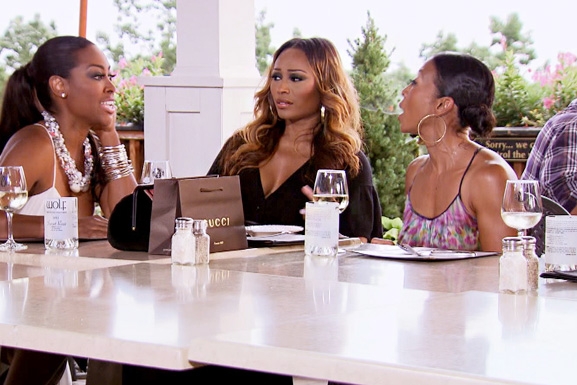 via her Bravo blog:

GOSSIP, LIES, AND SECRETS
Happy Martin Luther King Jr. Day everyone! It‘s the 5-year anniversary of the first Black President to take office in the USA. As Americans, our lives have changed for the better. Let us salute these great men that have changed the world for the greater good of mankind.

GOSSIP
Speaking of anniversaries, happy anniversary Cynthia and Peter! Peter always manages to make grand sweeping romantic gestures that any woman can appreciate. I found it odd that Cynthia manages to find random chicks and call them her friends. I found Natalie to have an agenda when she was speaking so negatively about Todd.

I’ve worked with Christopher Williams, (Natalie’s common law husband) on a play called “Gossip, Lies, and Secrets” years ago. There was more drama behind the scenes than on the stage. During that time, he told many of the cast that he was not married but they consider themselves “common law” married. Meaning…they lived off and on as husband and wife but never walked down an aisle nor had any legal ceremony.

SECRETS
I could not care less about their arrangement or her gift certificate of marriage, LOL! It wasn’t my business, but Natalie made it my business when she chose to blatantly lie about being married for 18 years and trash Todd. Trust me, there is a lot of tea I know about Christopher from being on a play with him for 3 months, but those are his secrets and he’s not relevant. As for Todd, I like Todd and Kandi together. They are happy so no one should care about his past or what relationships didn’t work.

When Natalie tried to insult me for exposing her… someone should have told Natalie, DON’T COME FOR ME UNLESS I SEND FOR YOU! And shame on Cynthia for taking her side in her interview. I’ve been a loyal friend to her and proven myself. With that said, at least ALL of the ladies rallied together to put Natalie in her place. I lived for Kandi, who got her together and sent her weathered face packing back to obscurity.

LIES
The shade is real. Why is NeNe so concerned with my house, car, or man? Yes, I moved from a 7,000 square foot home to 5,000. Still larger than the one she’s rented for 5 years, yet, larger than the one I owned for 15 years… but who’s counting but her? Yes, I have a brand new Bentley, it’s just a car! Since she’s in need of an upgrade she should get her man to buy her a new one from their shared bank account. As far as my “invisible man,” NeNe is in fact the only woman in the group who has met my “African Prince” so she knows he exists. Typically, very successful men who are into you don’t seek the spotlight, unlike the attention whore husbands some of the women are with. The fact that she would try to throw shade about this now is laughable to me. Are you surprised?