Kenya Moore On Nene Leakes “She Thought She Made It In Hollywood But She’s Nobody!” 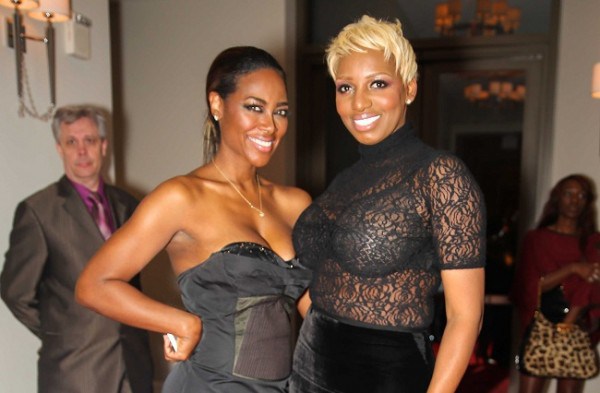 via S2S Magazine:
Their friendship seemed to be heading in the right direction on season 6 of Real Housewives of Atlanta, but Kenya Moore hinted that she and NeNe Leakes aren’t on speaking terms anymore.

“Last season, she had all these jobs. She was this Hollywood actress, and she had arrived, and she had made it and this season she doesn’t have any of that,” Kenya explained to Wendy Williams. “Last season she welcomed me. She was like, ‘Oh, Kenya, do your thing.’ Now, all of a sudden this is all she has and things changed. They drastically changed.”

The season did start of tense between Kenya and NeNe when Kenya complained about her co-stars not being there for her in her time of need. However, NeNe shut that down quick, reminding Kenya that all her cast mates were going through things. Plus, Kenya didn’t even respond to NeNe’s wedding invitation, much less attend the ceremony.

However, they seemed to move past that, and NeNe even took Kenya to look for a new place to live. She also organized a pow wow and encouraged Kenya to address rumors, about her relationship with Apollo Nida, that had her co-stars concerned. In a more recent episode, Kenya defended NeNe who planned an event for the women, only to have to wait three hours for them all to arrive.

A vast improvement over their season 5 relationship, which was virtually non-existent thanks to NeNe’s busy schedule, Kenya said their new-found camaraderie doesn’t last.

When asked if the two “RHOA” co-stars are still on speaking terms, Kenya didn’t confirm or deny, but it wouldn’t be the first time NeNe gave a housewife the silent treatment. After four seasons filming together, she’s reportedly no longer cordial with former co-star Sheree Whitfield.

Though there’s some tension, Kenya promised that there isn’t any wig-pulling or fist throwing coming up, but that’s no thanks to Kandi Burruss’ mom, Mama Joyce, who seemed ready to fight Kandi’s friend in a recent episode.

“It’s too much,” Kenya said. “I think Mama Joyce is off her rocker literally.”

Kenya talks more about Apollo and having kids below.

Porsha Williams May Be Fired From The Real Housewives Of Atlanta

Porsha Williams May Be Fired From The Real Housewives Of Atlanta