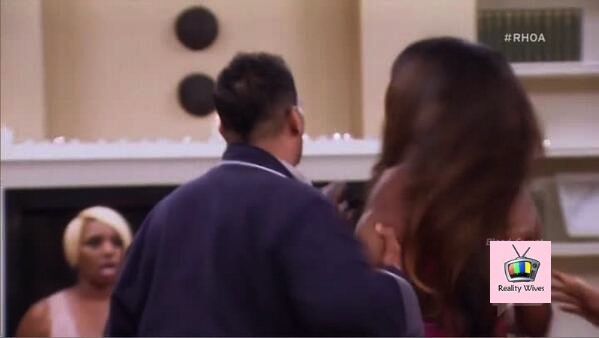 Interestingly enough, most of the cast of the Real Housewives Of Atlanta cast including Nene Leakes, blame Kenya Moore for the fight during the last episode. She on the other hand blames Nene and Apollo. Kenya actually revealed on Twitter but not in her blog that she actually saw one of the guests in attendance do a coke. 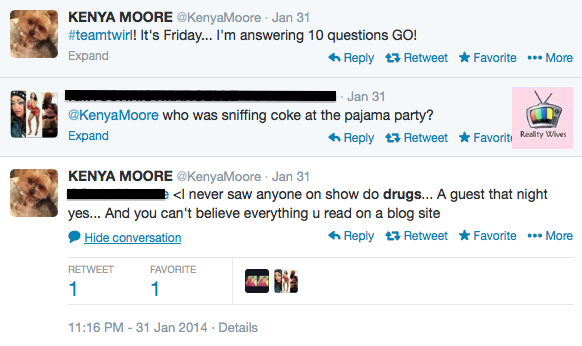 I considered myself a friend and have always been respectful and supportive of NeNe on and off camera. I ignored all the warnings from the other ladies about how she turns on people she is threatened by or that she feels steals the spotlight from her. However, I give people the benefit of the doubt and had enjoyed becoming friends with her.

When I arrived at NeNe’s event, I heard her ranting outside the door for the entire room to hear. Once inside, she was acting so nasty towards me by personally attacking me. She hurled insults my way such as “you think you are fabulous but you are not, you can go home, etc.” It was clear it wasn’t merely because I was late. She had already set the stage with her pointed inflammatory questions and her obnoxious “I am the star” attitude. She was out of line and I saw little trace of the sweet NeNe that I had come to love hanging out with. What she hasn’t learned yet is that the higher a monkey climbs, the more it shows its ass.

Natalie, Christopher’s common law wife, once again came with a plan. She was embarrassed that I exposed her lies to the world. It was her decision to come into this group and trash Todd’s past but lie about her marital status. I could not care less but know that I never pick battles I cannot win and I do not lie on people. Natalie began egging Chris on, prompting him to stand up to address me directly and that was acceptable to NeNe. However, when I stood up and slowly walked across the room to address Natalie, NeNe had a big problem with it. When Christopher grabbed my arm, I was outraged. Brandon did exactly what he was supposed to do and that is to protect me. NO MAN SHOULD EVER PUT HIS HANDS ON A WOMAN. For that, he is my hero. He is more of a man than any of the husbands that were in that room. Imagine if a man grabbed the arm of one of their women. It would have been a massive problem. Sadly, the women should have rallied by my side to support me. Due to their own insecurities or alliances, they chose not to.

Apollo clearly and without provocation attacked and brutally battered Brandon. The alteration was contained and nonviolent until Apollo charged Brandon and started relentlessly beating him. Brandon could send him behind bars for an automatic felony. However, that is Brandon’s decision alone to make. My only concern was for Brandon’s safety. When NeNe charged at me and tried to blame me really showed how irrational and manipulative she could be. There is no alternate universe that would hold me accountable for Apollo assaulting Brandon. Apollo is a convicted felon having served 6 years in prison. He is a liar and he is out of control.

With that said, I wholeheartedly apologize for the fact that anyone had to witness this behavior or that any persons would stand on the wrong side of right to prove a point to themselves. I do not condone violence on any level. We fight people daily for respect, for our rights and for our dignity. There’s no excuse for this type of behavior.

To that point, Phaedra goes out of her way to slander me by calling me out of my name time and time again maliciously calling me a whore. She crossed a hard line appearing on national TV shows and in interviews saying I offered Apollo fellatio at a fictitious hotel sighting in Los Angeles that never happened. ALL lies. I have never lied on anyone to disrepute or sully their reputation for the sake of revenge. Everything I have ever said about anyone, especially Apollo, on this show has been the truth. We all know who and what Apollo really is. Who’s crazy now?

More in Real Housewives Of Atlanta, Reality Television (2387 of 3054 articles)