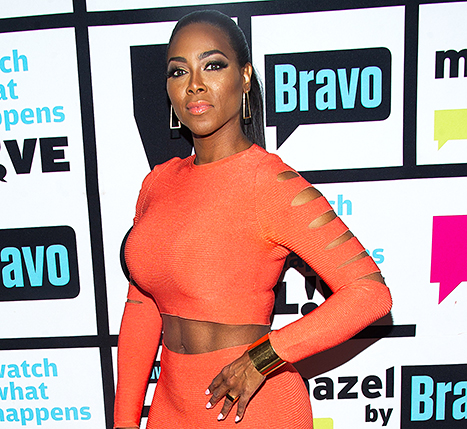 via US Magazine:
The fallout continues after Kenya Moore revealed that her Millionaire Matchmaker boyfriend James Freeman was married, one week after their episode aired. A source close to the Real Housewives of Atlanta star tells Us Weekly that Moore has been struggling after learning (via social media) that her ex met his future wife shortly after their Matchmaker episode was taped.

“Kenya is genuinely devastated,” the source tells Us. Indeed, Moore wrote in an Instagram post on May 12, that she was “astounded and devastated” after learning “that the man I met and fell in love with from Millionaire Matchmaker was married a week after the show aired.”

Millionaire Matchmaker Patti Stanger addressed the uncomfortable situation on Thursday, May 14, saying producers vetted him properly before the show was taped last fall. “He was single when he shot the show, which was in November,” the third-generation matchmaker and series’ executive producer told Extra. “They basically dated. They broke up… He met a new girl in January and he ended up marrying her. It was very fast.”

Stanger tweeted at Us Weekly on Friday and said that in no way was she defending Freeman. She reiterated that the real estate hunk was unattached at the time of shooting, and went on to date Moore. “But only they know for how long and what happened!” she concluded.

Freeman’s new wife Jaimi Gregory also spoke out this week about the fiasco, alleging that Moore was attempting to call attention to herself for publicity. “I met him in December. We met on Match.com and three months later we were engaged,” Gregory told RadarOnline. “Then on Good Friday, April 3, 2015 we got married. We just knew right away that we were in love.”

Moore supposedly reached out to him after their episode aired. “Kenya wrote to him saying that they should celebrate since their ratings were so high,” Gregory shared. “But he told her that he had met someone and fell in love so it wasn’t appropriate for him to talk with her anymore.”

Meanwhile, former beauty queen Moore, 44, told Extra on Thursday that she was moving on. “I’m in this fight and I’m a warrior and I just think life goes on,” the RHOA star said. While she’s put on a brave public face as her hope for true love continues, the insider tells Us that the aftermath has been awful for the Housewife.

Nene Leakes Says She’ll Be Back, Only If The Other (Gold Diggers) Ladies Won’t Be