Here is Kenya Moore’s blog from the 14th February, Real Housewives Of Atlanta episode titled, “Peaches Of The Caribbean”. 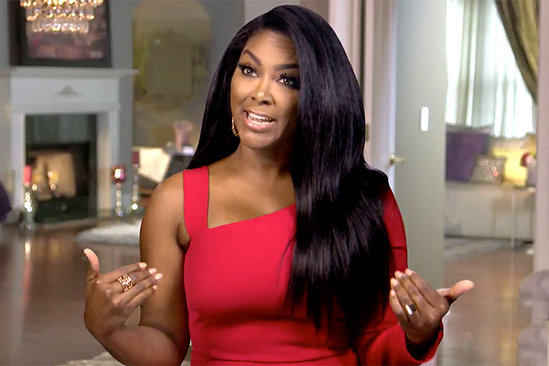 Were you surprised things were a little rocky between Matt and the other guys?
One of the reasons I’ve been hesitant to bring someone I’m dating around this group is because they are unpredictable, and you never know how anyone will treat them. Matt is a very sweet and easy going man, but be very clear he is not a punk. The men were clearly being disrespectful and rude to him which sent him into defense mode. Side note: All single black men under 30 don’t have five babies and five baby mamas. I digress… I’m proud of Matt for not losing his cool and walking away. He made me proud. Peter can learn a few things from Matt, despite his age.

What went through your mind when Sheree brought up the rumor about Kim’s husband?
GOSSIP GIRL I find it crazy that some viewers believe I started the discussion about Kim’s husband. WRONG. It was Phaedra. Phaedra stated he “was zesty” and “had a fire in his pants.” From there, each girl clearly stated that they saw questionable behavior from him (with the exception of Cynthia). The only reason Kim’s husband came up is because he had snapped on several of the women earlier that day. He was snapping his fingers in their faces, yelling at them being rude and “reading them” during their bus ride home from Jamaica. The girls were shocked as they didn’t see this behavior from him before. Apparently, he was so obnoxious he had to later apologize to all the women.

Collectively, we all saw signs of his dual personality which prompted the discussion about him at all and hence the prevalent gay rumors pre-dating the show. The gay rumors have been around for over 10 years. Anyone can google it–no one made them up. They exist for a reason true or not. Therefore, for me to mention the gay rumors were completely justified within the conversation.

To be fair, no one wants to be gossiped about, but we are publicly known so many believe our lives are fair game. Blogs make millions of dollars off hearsay; TMZ, Perez Hilton, MediaTakeOut, Radar, etc. are all blogs that regurgitate gossip for interesting fodder. With that said, it was a private conversation, so I was surprised that Sheree mentioned it to Kim, but I can’t fault her for it. I would want to know what is being said about me too.

TO BE GAY OR NOT TO BE GAY
I could not care less if a man married to another woman is gay or straight–that’s between two consenting adults. Clearly I have never cared about one’s sexuality. If your partner cheats it would not matter if he is with a man or a woman. Many women marry their best friends who are often gay, and it works for them. I believe a person’s character is what is most important in a friend, lover or husband. Love is love.

More in Real Housewives Of Atlanta, Reality Television (1307 of 3070 articles)