Kesha Nichols, Richard Jefferson & The Wedding That Never Was 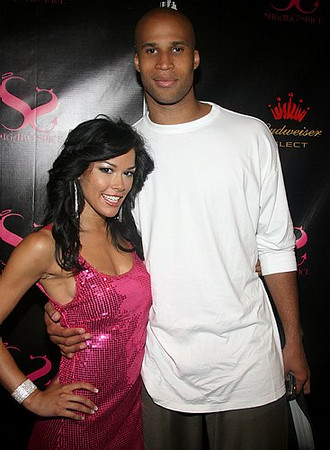 Kesha mentioned that what we have heard about her almost wedding, probably wasn’t true.

Here is the rumor:
Two hours before the wedding, Richard Jefferson called some of his friends and told them the wedding was off . The $2 million wedding was supposed to be at the the swank Mandarin Oriental in Columbus Circle. Some of the guests had arrived and had no idea what was going on. “He never showed up at the hotel, but all of his boys were there,” a friend said. “He gave his best friend the Black Amex [credit card] for the night.” The would-be bride was stunned, but “not entirely caught off-guard,” by Jefferson’s unsportsmanlike conduct, according to a family friend. Jefferson’s guests made good use of the credit card to party on their pal’s dime. Kesha did check in to the hotel on what was to have been her wedding day, and was upgraded to a suite on the 45th floor with a king-sized bed and a Central Park view.

Here is what actually happened:
The wedding was supposed to take place on July 11 2009, Richard sent Kesha the break up email on the 5th July. The couple spoke on the phone for over two hours. “It was a conversation Kesha and I had,” he said, adding only that it was “a combination of things” that led to the split. “It’s been an emotional time for both of us,” he said. “I know she’s hurt. I’m hurt, too.” He added, “I’ve made my mistakes in this relationship, 100 percent. But at the end of the day, there were some people who were responsible for the demise of it.” He insisted a rumor he’s gay had nothing to do with the breakup. Richard told his family on the 6th July, that the wedding was off. Kesha told her family on the 7th. Some out-of-town guests were already in, or en route to, New York, they then decided to go through with a dinner that was supposed to have been part of the wedding celebration.

Richard: If you aren’t 100 percent certain about something, you shouldn’t do it.

As a parting gift, Richard gave her a 6-figure settlement.

Richard: I’m not trying to buy her off. She has a lump sum to help her move on

Kesha must have been hurt.