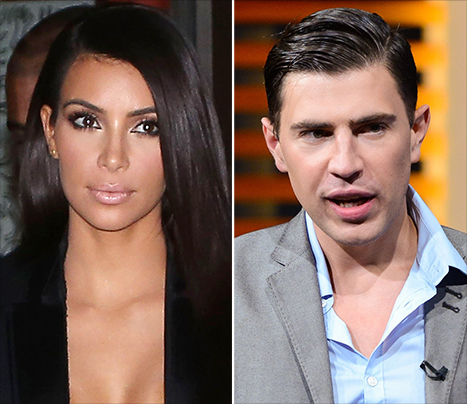 Earlier this week, while attempting to enter the Balmain Fashion Show, Kim Kardashian West was attacked by red carpet prankster Vitalii Sediuk while exiting her limo. Kim’s mother Kris Jenner screamed “No! Stop it!” as Vitalii attempted to go for Kim’s legs. Kim’s body guards immediately sprung to action, and Vitalii was removed from the scene. Now the infamous prankster and 25-year-old journalist is speaking out saying:

“I had a feeling that Kim would show up there because she is friends with the designer of Balmain. I basically came there just for them. I knew they were going to be the biggest guest of the night. If it was Kanye West I would have done it like I did with Bradley Cooper and Leonardo DiCaprio. But with Kim Kardashian, I was very cautious because I know she is a woman — so I kind of hugged her legs. I already had a bad experience with America Ferrara. It’s different with men. I like the show business world. But it’s obviously not my intention to offend someone. It looks like I’m a monster, but I’m a normal guy. Well, what I’m doing isn’t normal — but I don’t have bad intentions. I’m already banned in America. I could be banned in the European Union next. I hope I will not be.”

Vitalii also noted that no police were in the area at the time saying:

“Maybe they were looking for that. Because those pictures look like you are a God coming from the cross amid millions of fans and photographers. Maybe they’re interested in that.”

Kanye West Has A Handle Of Things, Protecting His Assets In Paris

Kanye West Has A Handle Of Things, Protecting His Assets In Paris