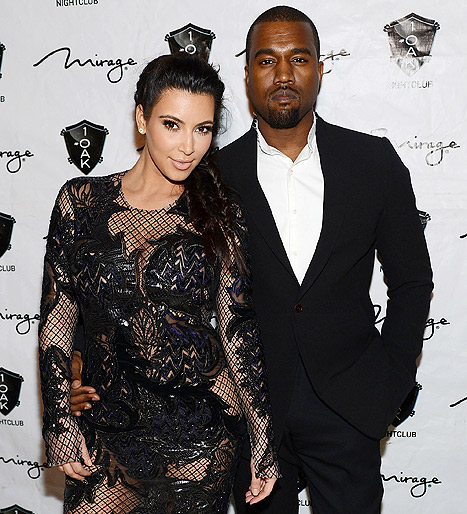 Kim Kardashian has been called multiple names for her pregnancy weight gain, some bloggers compared to her to Shamu earlier this month, and Donald Trump told Howard Stern she had a “fat ass” but at least one person thinks her curvier-than-ever figure is beautiful as is. The 32-year-old reality star told E! News this week that boyfriend Kanye West “loves” her new body, and he’s helping her to learn to love it, too. What I don’t understand is, when most women are pregnant they gain weight, what kind of nonsense is that?

“It’s just such an exciting thing, I think, for the guys to see our bodies go through all these different changes. He loves it and just embraces it. And he’s helped me to really feel sexy and embrace it.”

Indeed, as the April 1 issue of Us Weekly reveals, the rapper is totally on board with his girlfriend’s curves. “Kanye thinks Kim is gorgeous,” a source told Us. “He just wants her to be happy in her own skin.”

Easier said than done, but she’s getting there. Though a pal told Us the first-time mom-to-be “doesn’t like being called fat” and who does? another close source said she’s “finally accepting her body and getting more comfortable. She doesn’t feel sexy, but she feels feminine.”

I think it’s really cute. Now that my belly has popped a little bit, you can really see it, and it’s really, I think, a sexy thing. It’s cute when you can figure out how to dress for it.”

More in Kim Kardashian, The Kardashians (527 of 570 articles)