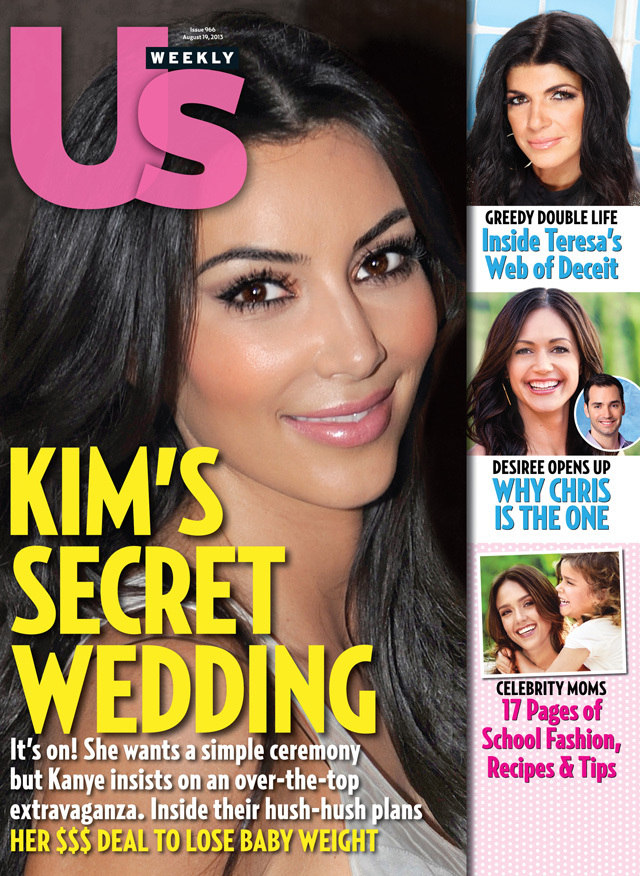 Another week another piece of gossip. US Weekly has the gossip on Kim Kardashian and Kanye West’s secret wedding plans. Has Kim ever done anything in secret? Well this remains to be seen.

This week’s Us Weekly cover story is all about new parents Kanye West and Kim Kardashian’s secret wedding plans. “They’ve been discussing marriage for a while,” says a source close to the Grammy winner. “A wedding is in the works.” After the reality star’s $10 million two-part E! wedding spectacular to Boston Celtics forward Kris Humphries, Kim originally wanted her wedding to Kanye to be simple and understated. But according to a close Kim confidant, “Kanye has never been married before and wants a big wedding, so Kim is getting used to the idea again!” In pure Kayne West fashion, a pal says “he wants something really cool and big and over-the-top.” The two things the couple is sure about for their big day? It won’t include an E! Camera crew nor be held in Hollywood. “They’ll most likely have a destination wedding,” says a source, adding that they’re considering sites near West’s 19th-century Parisian pad. “It’s a city that’s very close to Kanye’s heart,” adds the source. So what are they waiting for? Kim doesn’t want to walk down the aisle until her body is back to its pre-baby shape. “She’ll be hot any day now,” pal Jonathan Cheban predicts to Us. “A girl like that can’t be held down!

More in Kim Kardashian, The Kardashians (476 of 570 articles)