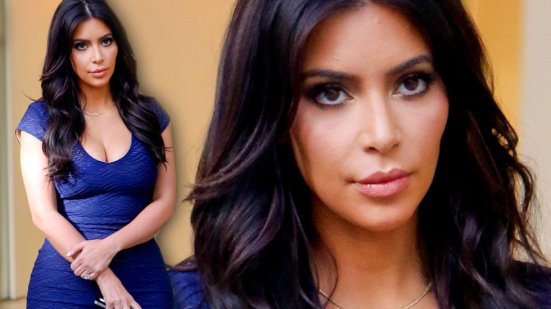 Kim Kardashian and husband Kanye West have been struggling to get pregnant with baby number two and Kim has decided to consider a surrogate, but sister Kourtney Kardashian refuses to help. Kourtney famously offered to be a surrogate in 2013 for her sister Khloe Kardashian who suffered a miscarriage with then-husband Lamar Odom’s baby on the family’s reality show Keeping Up With The Kardashians. But a source confirms that Kourtney won’t step forward for Kim saying:

“No way would Kourtney carry Kim’s baby! She’d do it for Khloe in a heartbeat, but Kim is such a control freak, she knows it would be a nightmare. Kim will use a surrogate because she doesn’t want to have a huge weight gain as she did while pregnant with North. Having worked very hard to get her famous body back into shape, Kim is afraid of being unable to do it again. Besides the weight gain, the pregnancy was very hard for Kim’s body. Constantly having cramps, and being uncomfortable made her miserable. Choosing a surrogate will be done with the utmost discretion. The surrogate would be very carefully screened.”

Despite getting pregnant a few months after starting to date Kanye West, Kim recently revealed that daughter North’s birth was a “miracle” saying:

“A few years ago I was told I could never get pregnant. Three different doctors told me the same thing, which is why I wanted to have my eggs frozen. I was just about to do that when I found out I was pregnant with North​.”