Kim Richards Was Drinking & Became Aggressive, Loud Prior to Arrest 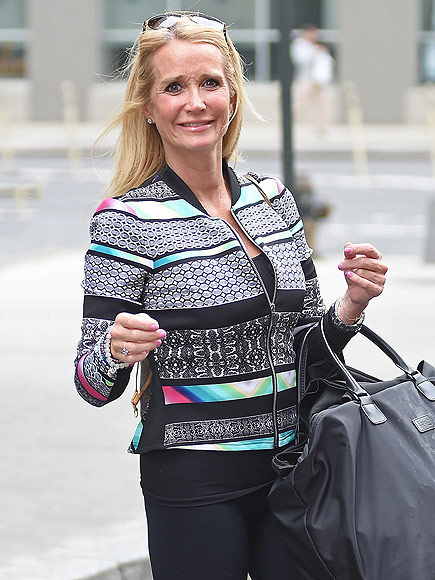 via PEOPLE:
In the hours leading up to her arrest for public intoxication, trespassing and more, a source at the Beverly Hills Hotel tells PEOPLE that Kim Richards, who spent time in a treatment facility for alcohol abuse issues in 2011, had been drinking.
Richards, 50, is a “frequent guest” at the Beverly Hills Hotel where she was arrested early Thursday morning, says the source. She dined in the Polo Lounge and then stayed for “several cocktails by the bar. She was drinking vodka.”

Adds the source: “Later in the evening, she became aggressive, loud and insulting to other guests. It was clear that she was very drunk.”

It’s hotel policy that the bartender stop serving guests if they begin acting inebriated, the source explains. When the bartender gently suggested that Richards order a non-alcoholic drink cocktail instead, “[Richards] got very mad at the suggestion. She insisted on having another vodka drink and when the bartender kept saying no, she flipped out.”

When hotel security tried to “gently” remove her from the bar so as not to embarrass her, “[Richards] was having none of it,” says the source. “She caused a huge scene and was so out of control.” In response to her escalating behavior, the Beverly Hills Hotel security had “no choice” but to call the police.

Police responded to “reports of a possible fight” at 1:30 a.m, according to a statement from the Beverly Hills Police Department, and the Real Housewives of Beverly Hills  star was taken into custody at 2:04 a.m.

Richards “was displaying symptoms of alcohol intoxication including slurred speech and belligerent insolent behavior cursing at the officers and passively resisted arrest,” read the BHPD statement. The reality star was charged with public intoxication, trespassing, resisting an officer and battery on a police officer.

Hours after being released from custody at 10:36 a.m. on Thursday, Richards was photographed outside of her home.

Richards has been “acting increasingly out of it,” a source close to her family previously told PEOPLE. “She’s been a mess, showing up late to events and social gatherings and acting bizarre or belligerent or both.”

Neither Bravo nor Richards’ personal rep have responded to calls for comment or clarification about Richards’ state of sobriety.

More in Real Housewives Of Beverly Hills (295 of 806 articles)