Keeping Up With The Kardashians | Season 8 Episode 5 Recap 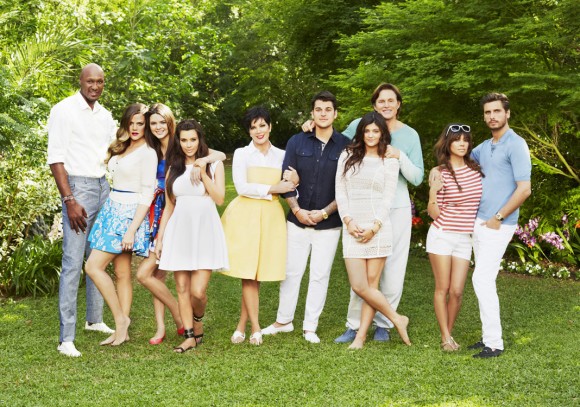 On Keeping Up With The Kardashians tonight, the relationship Rob has with his sisters and mom is a little weird. The show opens up with Rob telling his sisters he was going to go “jerk off for two hours” while Khloe and Kim ignore him. Very weird and disturbing. A short time later he calls Khloe requesting that one of the girls come to pick him up because he was out for a run and his car got towed. His family begins laughing and tells him that he is obviously joking around because he doesn’t run. The poor guy can never catch a break in this family with everyone always tearing him apart and putting him down. He hangs up and arrives home by taxi a short time later and confronts the girls and his mom. While Kim still says that he clearly drove home, Kris walks outside to see if his car is in the driveway and immediately feels horrible when she sees his car isn’t there. Then to make matters worse, Khloe reveals that she knows for a fact that Rob has been binge eating string cheese and that she and her friends went up to his room to yell at him for it. It’s no lie that Rob has gained a lot of weight this season, but instead of supporting him it feels like the whole family makes his weight out to be a joke and embarrasses him on national television repeatedly.

This episode also revolves around Kendall and Kylie and how they are consistently arguing. Kendall’s career goal is to be a high end model, something that has gone to her head. She now walks around in belly shirts, extremely tight pants, and $1000 Louboutins. When her agent tells her that she and Kylie were wanted to model a swimsuit line, Kendall turns it down because “that’s not the approach she wants to take.” Reminder: Kendall has posed in bathing suits before at the urging of her mother. Kylie is clearly upset with Kendall’s new “know all” attitude, especially regarding their clothing line together because the two disagree on everything. The girls’ agent also seems to favor Kendall and orders Kylie around. Kylie tells Khloe she doesn’t appreciate the amount of pressure Kendall puts on her because Kendall is only 18 months older than she is. The girls fight over dinner appointments because Kendall wasn’t invited to dinner with Kylie and her friend. Kylie tells Khloe that the reason she didn’t invite Kendall is because she always declines or comes and makes them all leave early. Eventually the girls realize that despite their arguing, they are sisters and that they need to have each other’s backs and be on their sides. Basically just normal sister fighting and it’s nice to see that some aspect of the Kardashian/Jenner lifestyle is normal. But please, Kris make Kendall dress more appropriate for her age! She is only sixteen.

A warrant is issued for Rob’s arrest following an issue with the paparazzi. The paparazzi attempted to take pictures of Rob on private property. Rob took her camera and the camerawoman was pressing charges. His lawyer told him to head to the police station, turn himself in, and post bail. But when he ended up getting there it didn’t lead to an arrest and he was able to get off. He calls Kris who is so elated she begins crying.

At the urging of Kourtney, Kris agrees to go to therapy and tell him how Rob has been really fragile lately and why she thinks he is feeling this way. The therapy thinks it would be a good idea for Rob and Kris to attend therapy sessions and work on it. When Kris tells Rob he gets snippy and doesn’t want to go. I think therapy is something that could really work magic on the two of them, especially because of last season’s therapy session that ended with Rob crying and hyperventilating alone in a bathroom. Scott could also probably use some therapy for his social anxiety. After attending a race car class, he feels like everyone is laughing at him and like he’s out of place so he leaves to go home to Kourtney. My heart broke in this scene because he had been SO excited to get there and learn to race but was so freaked out by how the other racing students were laughing at how little he knew. Poor guy. Also very insensitive of Bruce to laugh and say that Scott has to grow up when Kourtney revealed his social anxiety. Anxiety is a real thing Bruce, not something someone can just “grow” out of. What are your thoughts? Post your comments below.

Keeping Up With The Kardashians | Season 8 Episode 4 Recap

Keeping Up With The Kardashians | Season 8 Episode 4 Recap