Kyle Threatens To Quit Mid-Season, As Brandi & Lisa Confront Her Over Mauricio’s Cheating 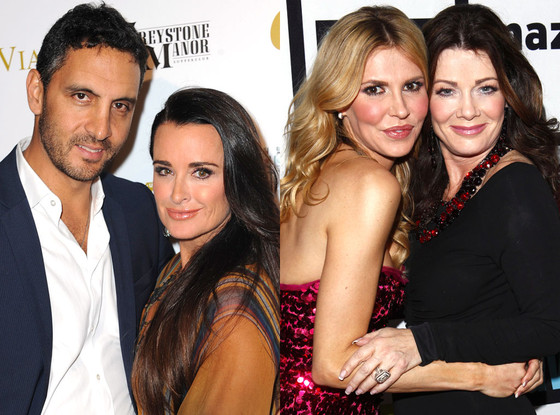 What’s a Real Housewives season without some gossip being ‘leaked’ to the media. This time the oft quoted Mauricio Umansky is cheating is back again.

Via Radar Online:
During filming for season four of The Real Housewives of Beverly Hills last week, Lisa Vanderpump and Brandi Glanville confronted Kyle Richards about allegations that Mauricio Umansky has been cheating on her.

The situation became so heated and intense that Kyle wanted to quit the show!

Although hunky Mauricio has previously denied womanizing, Lisa and Brandi decided “to confront Kyle about it on camera,” a source told Radar.

“They absolutely blindsided her, and were relentless.

“Brandi maintained she had solid information to prove that Mauricio has been cheating on Kyle. Kyle became extremely upset, and refused to listen to the girls. She felt especially betrayed by Lisa because they had once been so close.”

The interaction was brutal and when it was over the hit show almost lost Kyle.

Kyle was “so upset and disgusted after the confrontation, that she called producers of the show, and told them she wanted out,” the source said.

I don’t know why Kyle is ‘surprised’ there is always a scapegoat, a villain, a drunk and marital problems every season of every Real Housewives season. What are your thoughts? Post your comments below.

More in Real Housewives Of Beverly Hills (515 of 805 articles)