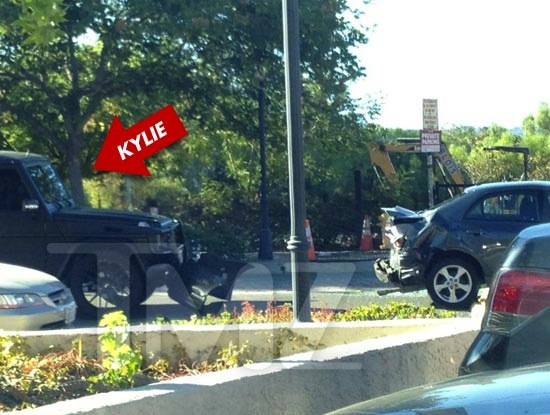 The Toyota suffered major damage to the back-end of the car. The Volkswagen also suffered bumper damage.

We spoke to a witness who says Kylie immediately got out of her car apologized and asked if everyone was OK. She eventually exchanged info with the other drivers and left. Cops arrived to the scene a short time later, but Kylie was already gone.

We’re told it didn’t appear anyone suffered any serious injuries and everyone involved in the crash acted very cordial toward each other. Kylie turned 16 on August 10 and was first spotted behind the wheel of the SUV at her Sweet 16 party on August 17.

We hope everyone involved in the crash is ok. Some pain and injuries occur later. I only hope Kylie wasn’t texting or tweeting. If the cops were called, why did Kylie leave, especially as the car she hit had so much damage?

Revealed: Lamar Odom’s Secret Arrest for Solicitation of a Prostitute