By : Ally
Comment: 0
Tag: Jaden Smith, Keeping Up With The Kardashians, Kylie Jenner 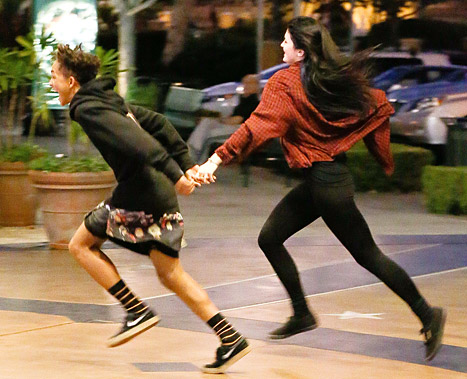 On Monday, September 30th, Kylie Jenner and Jaden Smith were spotted running from the paparazzi while holding hands. The two have been rumored to be a couple for the past seven months. After trying to sneak away from the photographers, they entered a movie theater where they met up with Bruce and Brody Jenner, and Brody’s current girlfriend Bryana Holly. Jaden clasped Kylie’s hand tight as he jokingly screamed while running. Kylie was grinning from ear to ear. After the movie, Kylie was seen wearing some of Jaden’s clothes as she left the theater.

In public the two try to keep a low profile but they express their feelings openly on their social media accounts. In July for Jaden’s fifteenth birthday Kylie wrote a loving note to her boyfriend saying:

“Although we can’t remember exactly when we met, I couldn’t be more grateful that we did. You understand me like not many do and you always know the right time to make me laugh. And no, you haven’t failed once to catch me when I attempt to walk or open the door on my every entrance. Happy birthday to my best friend.”

The two have been friends “forever” and decided to act on their feelings seven months ago and make it official. They have been photographed on a lunch date with Jaden’s father Will Smith, celebrating the Fourth of July together, and Jaden was present at Kylie’s Sweet Sixteenth birthday party in August. The two make a cute couple together. What are your thoughts? Post your comments below.