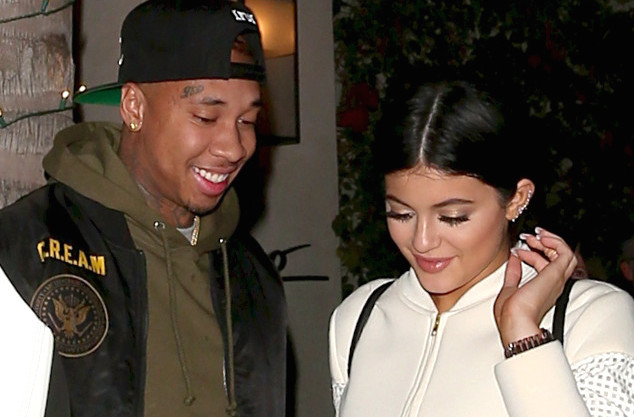 via E! Online:
Just one day after turning the big 1-8, Kylie Jenner decided to get away from Southern California with her main man Tyga for a birthday getaway.

While details remain on the down-low, multiple sources can confirm exclusively to E! News that the pair are relaxing in sunny Mexico for a few days. In fact, no big bashes are planned and other family members are not expected to visit.

“GONE,” the Keeping Up With the Kardashians star cryptically wrote on Instagram Monday evening, her brand-new white Ferrari parked on the tarmac, next to a private jet.

It’s been quite the exciting few days for the fashion designer, who had a birthday celebration for the ages on Sunday.

Held at West Hollywood hotspot Bootsy Bellows, the VIP festivities featured plenty of surprises,including Tyga presenting her with a brand-new Ferrari that can cost up to $295,000. The rapper and Fetty Wap also performed their biggest hits for guests that included Joe Jonas, Gigi Hadid, Kanye West and other members of Kylie’s sprawling family.

Before the big bash, Kylie also enjoyed a family-only dinner at Nobu in Malibu, where Kris Jenner and Caitlyn Jenner snapped selfies together, and she kicked off the weekend by visiting Children’s Hospital Los Angeles to meet patients in need.

While Kylie is remaining quiet on social media so far, her vacation won’t last too long. The E! reality star is scheduled to visit Canada on Sunday to host yet another birthday bash in her honor.

Lamar Odom Ambushes Khloe Kardashian At 6:45am Shouting At Her