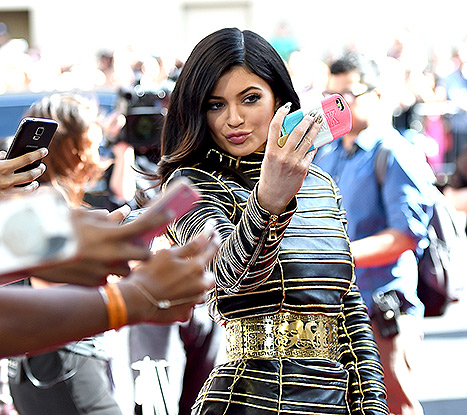 via US Magazine:
Kylie Jenner is adding songstress to her resume. The 17-year-old reality star has been secretly recording her first album, and her rapper boyfriend Tyga is producing it, sources exclusively tell Us Weekly.

Caitlyn Jenner’s youngest daughter, who has showcased her vocals by singing tracks such as DJ Khaled’s “How Many Things” on her Snapchat account, is taking vocal lessons — and according to her mom, Kris Jenner, she sounds “amazing.”

An insider tells Us that the PacSun and Topshop line fashion designer is also leaning on brother-in-law Kanye West for advice, as well as pal Pia Mia.

But it’s Jenner’s boyfriend of nine months who is her biggest supporter. “He’s helping her write,” a second insider tells Us of Tyga, 25. “It’s very Tinashe-type music.”

Jenner’s half brother Brandon Jenner and his wife Leah are also in the music business, and let’s not forget when Kim Kardashain dabbled in singing with 2011 track “Jam (Turn It Up).”