Season 2 begins with a photo-shoot for her makeup line Motives for La La. Lala has recently hired an assistant for Carmelo, named Asani, to assist Carmelo and her 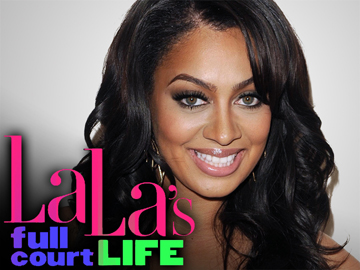 businesses; Asani, is single and cute. This was never an issue until her friends pointed this out to her. Charlamagne a friend of Lala’s, calls Asani a contracted side chick. Lala is better than me, don’t give your man, no matter how faithful he is, a reason to cheat.

Lala’s and Carmelo’s son Kiyan is the new face of Jordan kids. He got his model on, and did a good job. Carmelo and Asani join them later at the shoot. Now because Lala is listening, to her friends, they have planted the seed of doubt in her mind. She is giving Asani looks of disdain, poor Asani, has no idea what is going on and appears to be a capable and hardworking assistant.

Lala has no problem with Carmelo going to the strip club, is this acceptable behavior now? Apparently so. Lala invites GG a stripper over for drinks who shows her and her pals, some stripper moves. Lala tried to, but could not pop it or drop it like it’s hot. Dice showed her how it was done.

Lala speaks to her mom about the Asani/Carmelo situation. Her mom would not be surprised if Carmelo was cheating. Later, Lala has dinner with Asani and wants to let her know what is going on with the rumors from her friends. Lala asks her outright are you messing with my man. Asani of course says no.

I did enjoy tonight’s episode, it’s a nice break from the Real Housewives and Basketball Wives tomfoolery.