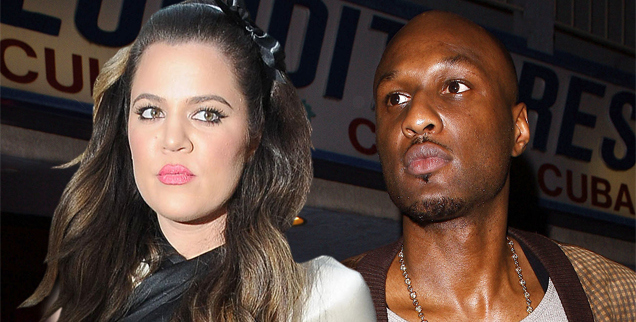 via National Enquirer:
Lamar Odom is demand­ing $10 million to end his four-year marriage to Khloe Kardashian!

Sources say the troubled NBA star has also taken a page out of his fellow hoopster Kris Humphries’ playbook by demanding Khloe’s $875,000 engagement ring back before he’ll agree to zip his lips about the K-clan’s secrets. Humphries got Kim Kardashian to return her $2 million engagement ring as part of their divorce agreement following their 72- day marriage in 2011.

Odom, 34, laid out his conditions after “momager” Kris Jenner ordered Khloe, 29, to sit down with their attorneys and hammer out a divorce deal, an insider says.

“Kris and Khloe are very worried about Lamar. He’s a loose cannon, and he has a lot of dirt on the family and nothing to lose,” a source told The ENQUIRER.

“He knows all about their extreme surgery procedures – when, how often and how much – and the pressure put on the younger girls to follow suit.”

Odom could also make waves by ripping the cover off the clan’s reality TV show “Keeping Up with the Kar­dashians,” causing them even more headaches, said the source.

“If Lamar reveals just how fake the show is, it could create all kinds of problems that the family doesn’t need,” said the source.

“Lamar is also prepared to destroy Khloe’s reputation by discussing their sex tape, and how she targeted him and tore his family apart.”

Odom has been sidelined from the current NBA season and he was recently spotted at LAX toting a self-help book. He was reportedly headed to work out in Rhode Island, where he played ball in college, preparing for his hopeful return to the Los Angeles Clippers.

“Kris is insisting on a confidentiality agreement to ensure Lamar can never discuss his life with the Kardashians either in print or verbally,” noted the source.

“He’s not signing anything until they cough up the dough.”

Find out more on Odom’s divorce demands, pick up the latest issue of National Enquirer, on newsstands now. If this is true wouldn’t it be interesting to hear what Lamar had to say about America’s sweethearts The Kardashians. What are your thoughts? Post your comments below.