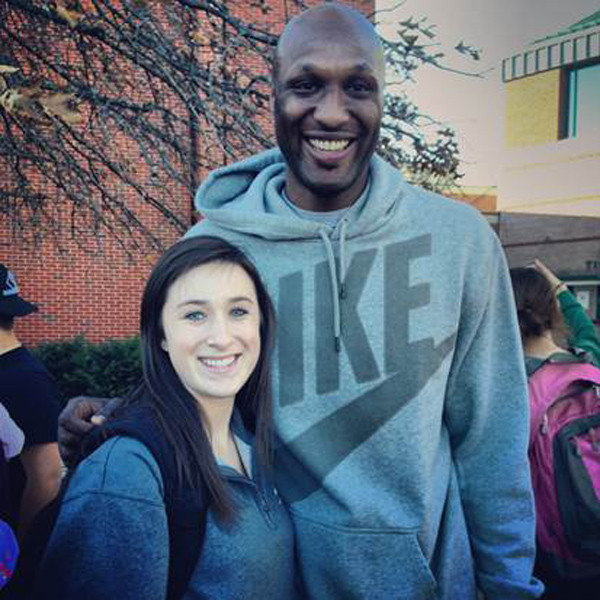 Lamar pictured with a fan

Lamar Odom is looking happy and healthy as he traveled to Rhode Island to prepare for his Clippers comeback. Though the 34-year-old forward hasn’t signed a contract yet, a verbal deal is in place after his meeting with Clippers coach Doc Rivers. He’s expected to start playing next month and will undergo his mandatory physical at a time closer to his debut. While in Rhode Island, Lamar took time from practicing to pose with fans for photographs. A source even said that he was wearing his wedding ring and “seemed so happy and healthy.” Lamar jetted into Boston and then traveled in a tinted Mercedes with Massachusetts plates to the University Of Rhode Island. A source says:

“There were swarms of students ditching class and running over to meet him, and he just kept smiling and saying hello to all of his fans. He was personable to everyone, and just had an overall good attitude.”

The school’s Ryan Center had been closed while Lamar was working hard, but he took the time out of his schedule to high five members of the school’s basketball and football teams and answer fans’ pressing questions concerning his marriage to Khloe Kardashian. Lamar replied “Khloé and I are fine. She’s in Australia right now and I’m sure we’ll be seeing each other again soon.”

Khloe has been in Amsterdam, Dubai, and Australia promoting the Kardashian Kollection for Lipsy. While away, Khloe shared a picture collage of her family members saying how much she missed her family, her nieces, and her nephew. Are you rooting for Khloe and Lamar? What are your thoughts? Post your comments below.