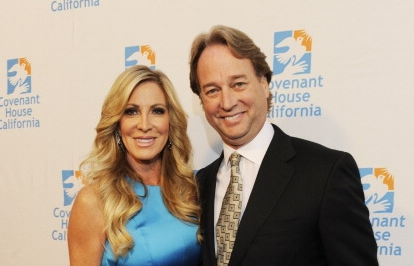 To say the Real Housewives don’t frequent blogs and tabloid sites is an understatement. Yesterday Vicki picked up this article yesterday and in a soap opera like act she the article about Lauri allegedly cheating on George months into their marriage, to her co-stars, Alexis responded “WHAT??! Is this for real?”

The rumors about my hubby & I are 100% false! Neither of us have ever cheated on each other nor have we ever lived apart! We have yet to have our 1st fight! We met on St Patty’s day 7 yrs ago and have been inseparable since! Right @GeorgefromRHOC

So there you have it, Lauri and George are happy and have never even had a fight, I wonder if this was a lie made up by George’s ex-wife, Gina Peterson? Remember Gina, she lost custody of her children to George and claimed her young daughter was kidnapped. It was a weird situation, read about it here. What are your thoughts? Post your comments below.

More in Real Housewives Of Orange County (237 of 361 articles)