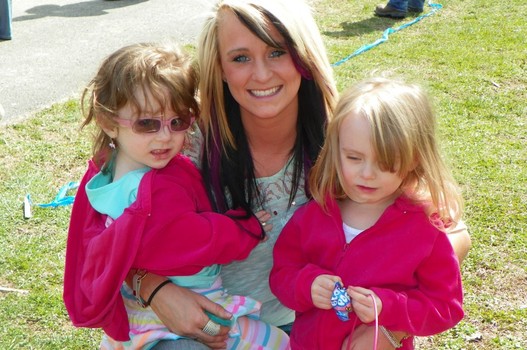 Leah Messer and her ex-husband Corey Simms messy custody battle has come to an end as they have agreed (again) on joint custody of their five-year-old twin daughters Aleeah and Aliannah. One of their twins, Ali, has a rare form of muscular dystrophy that caused Leah such anxiety she was prescribed an anti-anxiety medication. A clip of Leah slurring her words after taking her medication that aired on MTV’s Teen Mom was the start of the custody battle after Corey felt she was unfit to care for the girls. Corey’s attorney, Rusty Webb said that couple had a “very amicable” hearing on December 8th regarding custody. The hearing was held at the Kanawha County Court in West Virginia. According to the agreement, Leah will have the girls four nights a week while Corey and his wife Miranda Simms will have the girls the other three nights a week. Mr. Webb said:
“They’re both very happy with the situation. Everybody is getting along. There will be a shared responsibility to get Ali to and from appointments. Both parents will be present for her therapy visits.”

While filming the Teen Mom reunion special, Corey said:
“We’ve heard rumors about the medication and stuff and I didn’t like that. It’s Leah’s life, but it’s my daughters. The whole reasons why I asked for full custody, more time, was for the best interest of our girls and nothing more, nothing less.”

The custody agreement comes just days after Leah announced she will be returning to Teen Mom to film season 6 amidst the rumors that her marriage to Jeremy Calvert is over. What are your thoughts? Post your comments below.