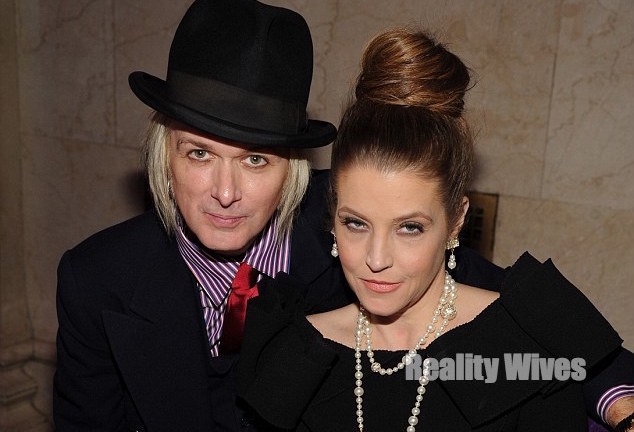 ‘Vindictive’ Lisa Marie Presley broke court rules by revealing claims that her estranged husband is being investigated over hundreds of raunchy pictures and ‘disturbing’ videos of children that she found on his computer, he claimed Friday.

‘I am disgusted that (she) described unproven allegations about me…in a declaration that she filed in this court’s publicly accessible records,’ Michael Lockwood said in papers filed in the latest round of their bitter divorce battle.

‘As I experienced during our more than 10-year marriage and as I believe this court will learn (Presley) has great difficulty being honest and she rarely, if ever, accepts personal responsibility for her own wrongdoing,’ he added.

‘It is particularly distasteful that (she) has placed more value on trying to damage my reputation than on the fact that her false statements may be brought to our daughters’ attention.’

Lockwood, who was married to Elvis’s only child for 10 years made the claims in court papers filed on Valentine’s Day in Los Angeles Superior Court.

Early on Friday, DailyMail.com exclusively revealed that the couple’s eight-year-old twins Finley and Harper were taken into care by California Child Protective Services after Lockwood’s computer was searched.

A court hearing is scheduled for next month to determine their fate.

Lisa Marie, 49, claims that Lockwood had hundreds of disturbing pictures on his computer and that cops in California and Tennessee are investigating further.

‘I was shocked and horrified and sick to my stomach,’ she said in court papers filed as part of her ongoing divorce from Lockwood.

She said police seized 80 of Lockwood’s devices and are still going through them to find exactly what is on them. ‘I have no idea what else may be on those devices and fear that there are more and worse images and evidence in these unanalayzed devices,’ she said in her filing.

But Lockwood said she broke the rules by revealing the ‘unproven allegations’ and that she is out to ‘destroy’ his reputation.

And his lawyer, Jeff Sturman, said that Presley’s attorney Mark Gross called his office with a ‘threat’ that he would go public unless Lockwood abandoned his bid to get $40,000 a month in spousal support and $100,000 towards his legal fees from The King’s daughter.