Here is Lisa Rinna’s blog from the 12th April, Real Housewives Of Beverly Hills episode titled, “Who Do You Believe?”. 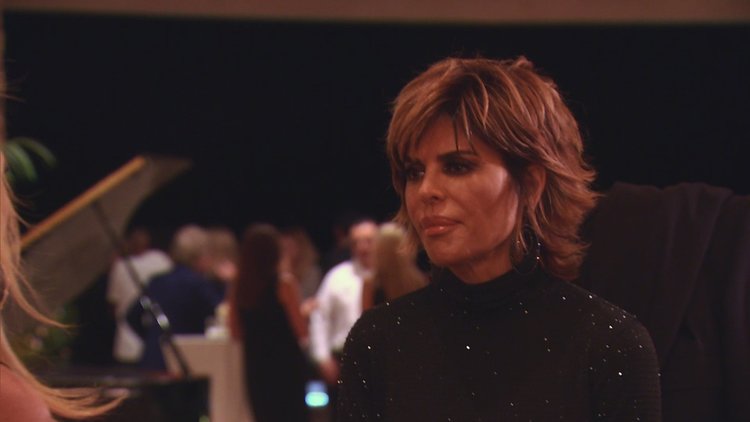 We did it! We made it through all 20 episodes and, as expected, we are all barely hanging on by a thread emotionally. After seeing some of the recent blogs, it appears that some of us may not be doing as well as others and are lashing out and hitting below the belt. For a woman who works 18 hours a day, has 250 employees, three shows on Bravo, three restaurants, eight dogs, five swans, two tiny horses, two grown kids and a 70-year-old husband to take the time she took to write that mean blog last week…WOW!

Eileen is a such a good, solid human being and friend, and she absolutely does not deserve any of this.

Ok, ok. I know I already said I’m as sick as you are with this same sh– being hashed and rehashed again. But here’s the thing: I watch along with you and when I see this whole game of “telephone” spin wildly out of control and we watch someone, tonight being Yolanda, relay incorrect information, I feel like I need to bring it back down to the basic facts and truths:

Like I said, if I could do it all over again, I would have gone directly to Yolanda and handled it privately with her. Another big lesson learned here.

Instead, and rather unfortunately, we watched this whole thing take on a life of its own. I own my part in it and simply wanted others to own their own parts as well. That will probably never, ever happen, but I can sleep well knowing I’ve owned my part.

This topic has now been put to bed. Well, until next week when we discuss it approximately 892 different ways during the reunion! *sigh*

Let’s talk about some of tonight’s highlights and go out on a good note.

On a more serious note, I want to express my empathy and sadness about the demise of Yolanda and David’s marriage. It’s heartbreaking, and it’s sad, but I know that Yolanda is a very strong woman and will come out on the other side better than ever thanks to all of the love and support she has surrounding her. As I have said before, Yolanda’s behavior has been confusing to me and, more than once, I had the feeling that something might be going on that we didn’t know about. I sensed that Yolanda wasn’t fully connecting her head to her heart, at least when we were around her. As unfortunate as the entire situation is, it makes more sense to me now, and I wish only peace and happiness for both Yolanda and David.

So, that’s a wrap on Season 6. What I have taken away from all of this is the fact that my bullsh– meter is alive and well and it is my natural instinct to call out bullsh– when I see it. The downside really is that nobody likes having their bullsh– called out and it adversely affects the friendship and the whole group. I miss having fun with these women, and that is what I treasure so much about my female friendships.

We’ve gone way off course, and I hope to be able to get back to having fun again, because this sh– is a drag.

Now we head into the reunion… See you there, hope you have your flack jackets on! I have mine ready to go!

Lisa Vanderpump: “No Longer Am I Blind”