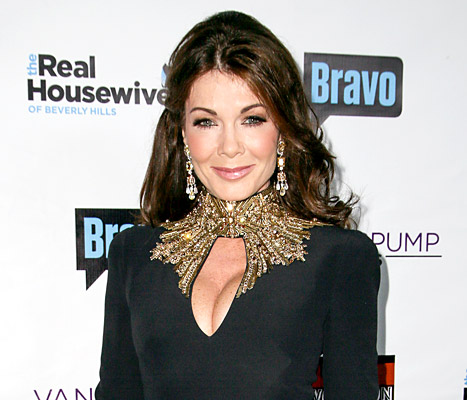 via US Magazine:
Lisa Vanderpump is on the defense. The Real Housewives of Beverly Hills star has found herself at the center of many arguments on the three-part Season 4 reunion of the Bravo reality show. A source close to the cast exclusively tells Us Weekly that Vanderpump, 53, is worried about how her fans will react to her appearance on the show — and the fallout she could potentially face.

“Lisa has been trying to spin everything in anticipation of the reunion not being good for her,” the insider tells Us. “She’s scared and concerned that people’s opinions of her might change. She might come out of this no longer as the queen.”

During the reunion, which premieres on March 17, Vanderpump confronts former BFF Brandi Glanville over claims she allegedly made that she’s near bankruptcy. “‘I was just repeating what Kyle Richards told me,'” Glanville reportedly said, though Richards denied making the accusation.

“Lisa brought it up immediately at the reunion because she wanted to play the victim,” the source tells Us. “No one hit below the belt, no one said something they shouldn’t have said.”

According to the insider, Vanderpump is currently only still friends with new costars Joyce Giraud de Ohoven and Carlton Gebbia. “She cycles through people,” the source explains of Vanderpump’s fallout with Glanville, Yolanda H. Foster, Kyle Richards, and Kim Richards.

Kim Richards also shared a piece of her mind with Vanderpump during the taping. “‘For four years, all I’ve wanted is your approval because I’ve looked up to you, and you have done nothing but thumb your nose at me,'” Kim said, according to the insider. “‘It’s really insulting that you’ve made me feel like s–t, and that’s why I have an issue with you.'”

Vanderpump was reportedly the main topic of conversation at the reunion, with majority of her costars accusing her of various bad behavior.

“Lisa did own up to a lot of it, but didn’t apologize,” a second source tells Us. “She seemed defeated.”

More in Real Housewives Of Beverly Hills (413 of 807 articles)