Lisa Vanderpump: “Yolanda Has An Undeniable Aggression Toward Me” 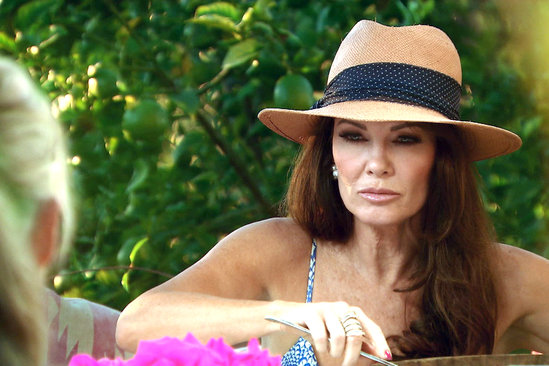 Welcome back…OK so we open with SoulCycle. Geez it was a lot of work, but I always see the funny side and it was for a good cause, so mission accomplished. Now ideally that is a world I would like to live in, a world where every moment is enhanced with playful banter, where people aren’t searching for negativity in a time that is already laden with difficulties. My days, as many of you know, are often challenging. When you have a staff of of 250 and a business that is open 16 hours a day, you cherish moments of down time.

Let’s cast our minds back…In the Hamptons I was reticent to chastise them for leaving abruptly, never sought to challenge Rinna when I believed it was her who told Yolanda, then also gave Erika a pass when it was revealed that it was she who instigated the debate over Lyme Gate and kids. I don’t look for problematic situations or dwell on contentious scenarios…some do.

We decide to go for lunch. It was my birthday, I had plans later, and I wasn’t really in a mood to invest in any negative conversation.
Yolanda showed up with pink roses (excellent choice), and I was pleased as the last meeting had been littered with angry accusations, her berating me for attempting to explain Rinna’s stance and her actions…

Kyle and I were curious as to what had transpired between Yolanda and Rinna, of course. Each and every scenario and discussion that is brought to the forefront is discussed at length. That is the premise of this world we live in.

Sometimes things are not captured, and that leads to confusion. Our thoughts and opinions are what many are invested in as people relate to varied points of view.

I believe Yolanda had fired back a hypothetical diagnosis of Rinna’s bizarre behavior, calling her bipolar as a response to her initiating the Munchausen story. Tit for tat, so to speak, but the accusation resonated, although unsubstantiated her erratic actions that made no sense to many of us.

I see clearly that Yolanda has an undeniable aggression toward me, and I am sorry for that, but I was resolute in the fact that Yolanda had misinterpreted a conversation that had been relayed to her. I was steadfast in my resolve to communicate that my intention was to keep as distanced as possible, to refrain from any discussion regarding Lyme out of loyalty to the family. I vehemently defended Bella previously (quite rightly so, all three of them are lovely beings), so I stated my case and left, thankful to continue my birthday in a more celebratory atmosphere…

Twas the day after my birthday, and I wanted to have a small dinner. I invited everybody, but some couldn’t make it. The subject matter of Eileen and the Hamptons I believed was closed. Little did I know, round three…I intended a cosy dinner, yes I do live in a bit of a zoo, but it’s our sanctuary. I strive for a surreal existence away from the constant challenges that life demands.

It really surprised and dismayed me that Eileen felt compelled to reignite the subject matter of our misunderstanding in the Hamptons. She was here at my house, I believed all was well, they were all mimicking me–which gets old really quickly–but I always ignore it! And then back we went, round and round the same old sh–, beating the life out of a dead horse. I have said “sorry” three times, sorry for inadvertently touching on a subject that had already been brought out in the open a couple of times, sorry for asking her questions about her life–I was actually sorry, sorry for ever engaging in any conversation with her whatsoever as this seems to be the catalyst for what is about to transpire. Maybe I should’ve throw a glass of wine in her face, and we could’ve hugged it out, LOL.

Kathryn relayed her conversation with Erika with, I believe, good intention. She has been critiqued immensely for this, as if she was creating drama, but no, she was absolutely cognizant of the fact that I was enjoying my friendship with Erika and was blissfully unaware of the antagonism that Erika was spewing. She was well aware that I would hear it later, so she repeated the statement Erika had made. She was looking after my welfare, so she repeated the statement Erika had made. I don’t know why it hurt me so much. Maybe because I had hopes of a friendship with her, but obviously she thought otherwise. Perhaps I envisioned a repeat of an ugly experience I endured before, an experience that cut to the quick. I think Kathryn was baffled why she was so negative in her attitude toward me, and I felt the same. I couldn’t understand it, because at the initial dinner with Erika and her husband Tom, I took it in good humor–his assertion that I was akin to an alligator. I never met him before that dinner, complimented him and was gracious. Now my perception is different. I understand now how I misinterpreted that…

To hear Erika state something so detrimental was extremely hurtful to say the least, and this is where it starts…

How can one make such a vicious comment about someone they barely know? Also someone that has welcomed them into their group. I have little understanding of where this comes from. She was introduced by Yolanda, and all of us were totally supportive.

Confused as to why she would level such a negative analogy toward me, I suppose we will have a better understanding as the story unfolds…
I will close off now as this blog is becoming a chapter. I could most definitely dissect every detail and still not have clarity on what has arisen…We are all blessed,this group of women. Let us not forget that, whatever nonsense we all engage in!

I bid you all a good week, remembering my old mantra that love and laughter supersedes all…As always …Love Lisa.