Memphitz Responds to K Michelle’s Abuse Allegations; I NEVER Hit Her. I Only Restrained Her When SHE Attacked Me! 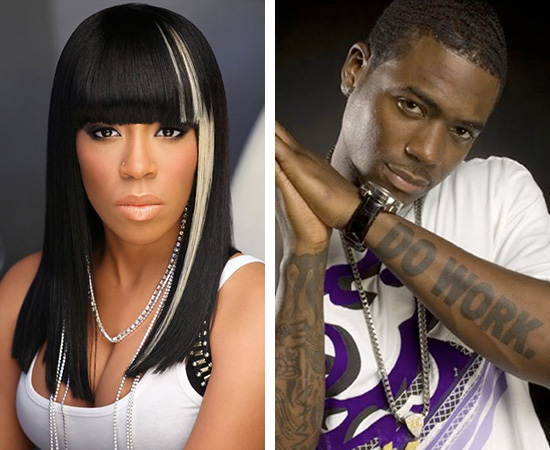 On the season premiere of Love and Hip-Hop: Atlanta over three million viewers watched as singer K Michelle told her story of an abusive relationship, with her ex boyfriend, who she alleges beat her a**, after he allegedly spent up her seed money from the record label.

That so-called abusive boyfriend turned out to be Mickey “Memphitz” Wright, who is married to Toya Wright, the ex-wife of Lil’ Wayne. K Michelle confirmed this, saying that she didn’t mention his name on the show on purpose out of respect for him and his new wife.

Memphitz called in to TT Torrez at iPower 92.1, on the 25th June, and told his side of the story, explaining how he and K. Michelle met, their relationship, and how he has NEVER put his hands on her in the way that she alleged on the show. He says he didn’t hit her … he only restrained her when she attacked him.

On mixing business with pleasure and getting intimate with his artist — K. Michelle:

I have to take blame. One on one time with this pretty girl, she do music and I do music and she was making me laugh. It was innocent and it was cool. It was my fault too. I can’t say K. Michelle just came and whatever, but yeah I shouldn’t have done that either, as a young CEO.

I was very very fond of K. I wasn’t in love with her like she seemed to be in love with me. She used to come over my house, I used to go over her house.

On the alleged fight and how it started:

I listen to music every day. We in Memphis. This guy, I don’t know him, people came to me and said, ‘this is the OG, he has something he wants you to hear’. I said, ‘Fine’. He got a girl. She singing. I’m sitting listening to the girl in the car, and [K. Michelle] says, ‘Oh hell naw! Cut that sh-t off. Ain’t no b-tch getting signed to this label. I’m the only b-tch on this label.’ I’m apologizing to people and I just got tired of apologizing to people.

This is the day I broke up with her in the hotel. I get back to the room. I was like “Yo for real? That was the last night.” This is after multiple times of embarrassing me in front of people, relationships I’ve made over the years from being an intern nobody knows in New York on my own from Memphis [type] relationships. My whole livelihood. I’m taking her places thinking, you’re gonna do what I told you to do when we were making the plan, just sing. Just sing! This particular day, after this situation happened, I go up to the room where she’s at […]My friends take her back to the room so I can finish having this meeting with the guy after I had to apologize severely for what just happened. I get up to the room and I’m like, “Yo for real that is the last time you embarrass me, I’m done!” That ain’t my swag, that ain’t who I am.

All of a sudden, I see it for the first time: the Tasmanian Devil, start swinging, throwing stuff at me. I’m like “What the f— is going on?” I’m trying to get to the door, blocking punches, I’m trying to explain to the housekeeping ladies, “Y’all call somebody,” ’cause she’s throwing stuff out the window. […] I grabbed her, grabbed her arm, I’m tired of taking a thousand swinging punches from a girl. Yes I grabbed her and held her arm down from hitting my a– again, and she was screaming and screaming. I covered her mouth because she was screaming so loud, people were knocking on the ceiling, I was like “Stop, what are you doing? Do you see yourself? Are you crazy?’

After the whole police thing, I just stopped talking to K. Michelle. I told her in front of the police, ‘I have never been in the same room with a female and the police at the same time, and this will be my last. I don’t get down like that.’

On the ‘I Made You’ comment he made on Instagram/Twitter:

I know that stung people. First of all, I will apologize to anyone who took that in an offensive manner. What I was saying was I didn’t create K Michelle. I did not give her her voice. It came from God […] What I’m saying is, when you got to me, you were very pretty, but once we started doing that thing I was saying, we were talking what should we do? We should fix that, and we should fix that […] Yes I put you together in a form for the industry, I put you together. […] I knew it was gonna sting, because look what you just said about me? That’s a lie.

On K. Michelle’s “$2 million dollar deal” and her allegations that he spent all of her advance money:

Unless you have a substantial amount of heat on you in the streets, it is far-fetched to say any new artist receives 2 million dollars on a deal. She got signed for around $500,000. Then after re-forcasting, I said we have to fix this, this and this. (referring to upgrading her assets). I was given money to run my label but I never touch an artist’s situation. When they get the deal, a part of that deal is for recording, mixing and all of that. Another part of their deal is for them to take care of themselves. A&R’s don’t have access to the artist money, you submit a budget and the label gives you that budget if they approve it.

On why his label folded and why he no longer works at JIVE:

I was trying to be a one man show. It was certain things. Like K going up to the office and telling the label that I hit her…

Memphitz also said that the only reason K. Michelle didn’t say his name on TV was because he had his lawyers call up VH1 and told them unless K. could prove that he abused her, he would sue the show if his name was mentioned at all.

Interesting. Did anyone know K Michelle was talking about Memphitz? Well he just put himself out there and outed himself! There is never an excuse for a man to put his hands on a woman, but it makes me wonder if K Michelle initiated the fight, being that she is so calm and mild mannered (sarcasm).

Listen to the full interview below: