Mimi stays the night at Ariane’s house and they discuss that Stevie J is obviously screwing around with Joseline. Mimi states she is hurt, embarrassed, pissed off and disgusted with Stevie J’s behavior. Ariane asks her is she is going to leave Stevie, she seems unsure. What is there to be unsure of?

Rasheeda and her husband of 12 years and manager, Kirk are up next, Rasheeda was signed to multiple labels 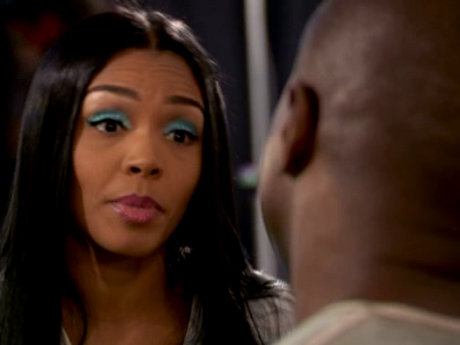 such as Jive and Motown, but was dropped, she is now marketing herself as an independent artist and doing well for herself. They have an 11 year old son, and she has 4 step children, which I am assuming Kirk had children before meeting Rasheeda. How old was Kirk when he starting having children, good grief. They discuss how Kirk should have a more vocal role in her career and not just her servant. Later, Rasheeda is late for her video shoot, Kirk is upset. Rasheeda blames that the budget was cut and she had to style herself. Why not head over to Kandi Burruss’ store and have her hook you up?

Karlie who stirred the drama last episode, goes to see Stevie. She is met by Joseline and her tacky Tami Roman weave circa 2010. I feel I have to work too hard to try and understand Joseline, there’s something about the way she speaks, tipsy, messy or sloppy. May be she needs subtitles. Joseline who believes she is the queen of the studio lets Karlie know she can at least say hello. Karlie tries to explain that her trifling a** was just giving Joseline props the other night, right.

Mimi wasn’t answering Stevie J’s phone calls, so he popped up at her job, where does she work? Apparently a cleaning service, does she own this company or is she just an employee, if so not a good look Stevie J. Mimi wants to know what’s happening with him and Joseline, he asks the proverbial, why you ask that? Because you are an a** answer the damn question. He wants to see her after work and states he isn’t sleeping with Joseline, note he didn’t say he has never ever slept with Joseline. She tells him I will see you tomorrow.

Ericka meets with her mom Mingnon, yes Mingnon. Mingnon asks her daughter if she knows the difference between a man and a boy. Mingnon thinks that Lil’ Scrappy can do more for her daughter. Ericka divulges that her mom raised her until she was 4, then her mother was addicted to crack and she subsequently went to jail. They cry as Mingnon states she never stopped loving her daughter and asks for her forgiveness. Ericka forgives her mother, but the hug they shared seemed forced.

Mimi has high tea with Karlie Redd at her home, she states she wants to work with Stevie J, just after she said that he and Joseline are sex buddies. Ok.

Mimi meets Stevie J for dinner and presents him with paperwork drafted by her lawyer asking him for 20% of his profits. 20% of nothing is $0 Mimi, what money is he making right now, except for what he makes for his appearances on the show? He is not too pleased with that offer. The only 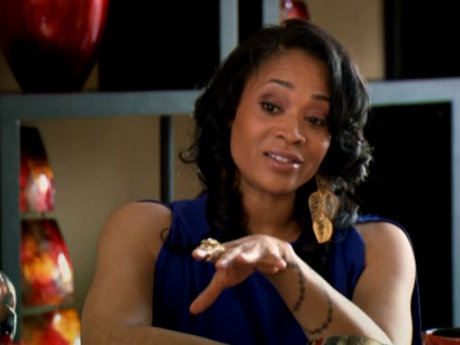 paperwork I would be presenting him with would be child support documents. He wants to make Mimi smile and sings her a song. He has been acting real dirty and shady, so to make it all better she wants his money. Stevie J sings and plays the piano for Mimi, her panties are immediately melted off, she forgets how embarrassed and disgusted she was with his behavior; and she says she loves him and they kiss. *side eye*.

Next scene is Joseline and Stevie J at the piano, he is teaching her a new song. Joseline tells Stevie her period is 3 weeks late. (I’m hearing all the men don’t get period jokes). Mimi walks in and tells Joseline that she is going to be more hands on with the business. So does Mimi think that because she is going to get a percentage Stevie J will stop cheating, or is this her way of getting some money for her pain and embarrassment. Mimi asks about his feelings for Karlie Redd. Joseline butts her big mouth in and states Karlie can wait. Mimi tries to shut her down, as that decision is none of her business. Joseline doesn’t know her place at all, honey you are the side ‘chick’. Mimi and Stevie J hug and she leaves.

Ericka and Lil’ Scrappy talk about their minimalistic relationship. Lil’ Scrappy (I hate calling him that), looks strung out and tired. His career is stressing him out. What career?

Joseline locates Karlie at the gym, how did Joseline know where Karlie was? An iPhone app? Joseline tells Karlie that she needs to stay out of her business. Joseline is right. 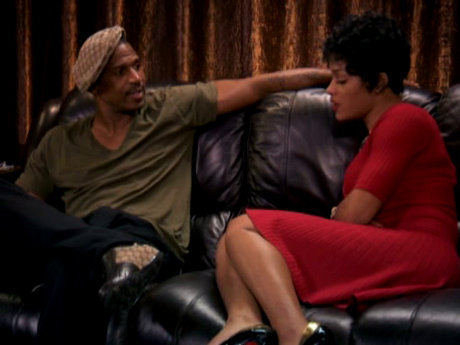 Karlie is Suzie Ketcham’s twin, a blabbermouth and a stirrer. Joseline tells Karlie that if Stevie J has the time and she gives the ok, then he can work on Karlie’s music. LOL. This is a joke, didn’t Joseline get the memo about her having no say in Stevie and Mimi’s business.

Joseline pees on a stick and from her face it appears she is ‘pregnant’. She brings the peed on stick to Stevie J and tells him she is pregnant, she starts to cry. He asks her why she didn’t hand this off to her manager and where the hell was this manager when she stupidly posted a naked picture of herself on twitter last week? Joseline then asks who else am I going to give it to. If you aren’t ‘kissing’ this man, then why show him the pregnancy results? He then asks her who’s the father. She doesn’t want to tell him. Get Maury on the case.

This is some terribly scripted mess.