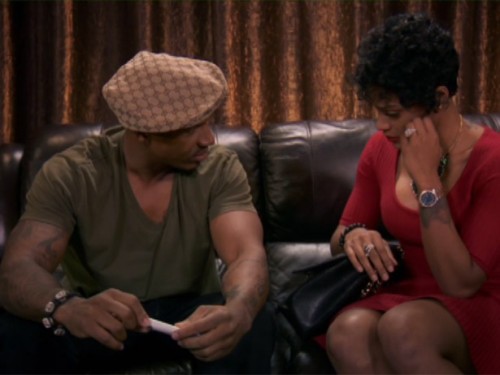 Stevie J and Joseline continue with their fake pregnancy story.

K Michelle goes to see producer, she retells the story of when she left Jive records, there was no money left for her record to be made and she wanted to know what the hell happened, where are the receipts? So her rep is now an angry black women, who doesn’t get things her way

Lil’ Scrappy visits his mom, and he mumbles that Erica is not very affectionate with him. Who could be affectionate to that illiterate human tattoo board.

Rasheeda and Kirk discuss the short-comings of the budget for her video-shoot and her being late. Is Rasheeda high? You decide to be late because the budget was cut. Rasheeda needs a manager who is not her husband, because she disrespects him thoroughly.

Erika decides to sex it up for Lil’ Scrappy, rose petals, wine and lingerie. This is of course how to win back an illiterate jerk of a man, who is moving out. Food, wine and sex. Poor Erica doesn’t realize how she has cheapened herself. He lets her know that he has found a place and he is about to sign the lease, she is not pleased as she thought her sexing it up, would make hin reconsider leaving  their home. Why didn’t she just let him know? They later state that they are both going to work on their relationship together while living apart. Lil’ Scrappy is looking not just for the l–e but the ov in love. Lil’ Scrappy is such a poet!

K Michelle has a showcase and sings a lovely song, she has a great voice. Mimi hears some drama from Karlie Redd aka Suzie Ketcham aka The National Enquirer, that some random boo boo chick claims to have slept with Stevie J. First of all Mimi needs an STD test and Stevie J needs to be castrated. He must have a powerful pipe that make women turn stupid or the women he is dealing with are stupid. Stevie J sees Mimi’s stink face and decides to see what’s up, so to test the waters he asks her for a kiss, she says I will call you when I’m done. Ouch. Erica was mimicking what happened between Mimi and Stevie J, he did not like that, he calls her a b_tch and a disrespectful slut monkey. Erica thought Stevie J was just some random dude hitting on Mimi and Mimi J didn’t let her know until later. How do your friends not know who your ‘man’ is? Stevie J has everyone on the downlow.

Mimi states she kicked Stevie J out of the bedroom as he was drunk, what does she want a parade and a cookie? Kick him out of your life and your house. Mimi is a laid like a carpet ready for Stanley Steemer Carpet Cleaning services.

Joseline’s neighbor Stanley comes over to see her and she tells him that she is pregnant and in love with Stevie J and she doesn’t know what’s going to happen but she is going to speak to Mimi. Stanley is soap opera ‘shocked’ her barely showed any surprise in Joseline’s news,. Is Joseline thick? That’s what you do, go and talk to the woman who’s man’s baby you are ‘carrying’. That’s going to go well. 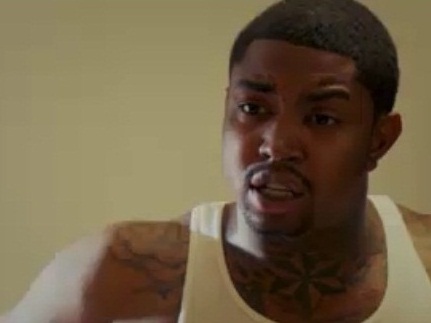 Lil’ Scrappy is packing because they are going to be together not because of circumstances, but because they want to. *side eye*. Erica informs Lil’ Scrappy what happened at K Michelle’s showcase, Stevie J calling her a b_tch. Lil’ Scrappy  “I wanna rough him up, I wanna put some paws on him”. Next week should be interesting.

K Michelle and a friend discuss Karlie Redd’s blabbermouth. Karlie apparently approached K Michelle’s producer and told him that he signed the wrong artist (K Michelle) and should have signed her (Karlie). Karlie Redd is a hot mess and is working overtime to start trouble with everyone.

K Michelle goes to see Jeff Robinson a music manager – responsible to Alicia Keys & Tyrese. Jeff asks her about her past behavior. He tells her to mind her p’s and q’s and she decides to hold her temper so her music will speak for itself.

Joseline has a meeting with Mimi and informs her that she is pregnant. Where did Joseline get Mimi’s phone number from and why did Mimi agree to meet Joseline anyway? To no-one’s surprise, Stevie J is texting Joseline at the time of the meeting. Mimi says tell Joseline to tell him to come and join the party. Stevie J arrives, big surprise. He takes out the pregnancy test out of his pocket. What kind of nasty person carries out a peed on stick out their pocket and shows it to his ‘woman’?. Mimi asks them both when they last had sex. Joseline said 5 days ago and Stevie J said a month ago. What more is there to say Mimi. Leave him he has admitted to cheating on you, after lying to your face. HELLO!? Mimi is better than me, if there ever was a drink, chairs or tables to be thrown THAT would have been the time to do so!

Stevie J and Joseline argue outside. He tells her, that she is going to go back to the strip club and that he has papers on her, what kind of papers, immigration papers? She starts to cry and shout, he tells her to act like a lady and then tells her she looks nice, looking her up and down. Stevie J is a mess, but these women are all, clamoring all over him for some reason. You couldn’t pay me enough to be embarrassed, stomped on and humiliated on national television, I’m talking to you Mimi, Joseline and Kirk.