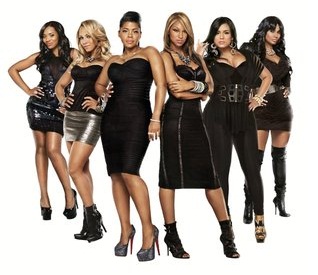 Yandy visits Kim, and she tells her about her quest to sort out Erica at the club. Kim tells Yandy that Juelz was also arrested, for getting into an altercation with a neighbour with $47,000 bail. Does Juelz not have this money?

Nancy and Chrissy bond over a baking session, Nancy wants some grandchildren stat!

Olivia decides that the deal she was offered is not for her, she wants creative control and with that deal she would not be in control. Rich is frustrated as he has been shouldering most of the burden and this is no longer financially, feasible for him anymore. I can understand Olivia wanting to maintain control of her career, but for two seasons we have seen her go nowhere. Meanwhile Somaya who was missing for a few weeks, brokered a new recording deal and got new management and none of this was aired on any episode. Proof that producers prefer nonsensical drama rather than see a woman’s hard work come to fruition. See: Erica Mena’s immature, messy self.

Has anyone noticed when Chrissy is on camera with her lower than lower dresses, her right boob looks pinched… I heard the rumors her previous gangsta boo paid for them.

Chrissy and Emily have drinks. Emily tells her about the conversation she had with Fabolous’ prior assistant, that woman must have been full of crack! She said Fabolous’ heart is breaking and Emily should go home to him. Fabolous’ heart isn’t broke, his back-up sex is no longer available, that’s it. If a man wants you there is nothing you can do to keep him away from you! I still can’t believe any self respecting woman would ever give such stupid advice to another woman.Chrissy said she knows things happen but she had better not find out about it, insinuating that cheating happpens. Is she implying that Jim has or is cheating? Chrissy also did agree with the assistant that certain things come with the territory when you are dating someone in the business. But self respect and respect to your partner always comes first. I’m sorry to say Fabolous does not respect Emily. When you love a man who treats you like dirt, pop your collar and walk away.

Kim states that Juelz most likely had never been in a relationship before. She feels something isn’t right. I could have told you that from their body language when they are on air together, they appear to be distant. Kim’s parents visit her, from the way she, her mother and brother talked about him I thought he was AWOL. Kim tells her parents Juelz is in prison and she is pregnant. Her mother’s response, I don’t know why he doesn’t put that ring on you yet?. What? Juelz doesn’t seem to know his responsibilities without a ring, what would make you think he will man up and be a father and husband to your daughter after a ring?

Kim meets with Yandy for dinner. She tells Yandy that she is unhappy, her son has diabetes and it appears that Kim is running the household by herself. Juelz had beef with his neighbor which caused him to be in jail away from his family, because he was standing up for his street cred instead of understanding what a man does for his partner and children. Juelz real name is Laron L James earlier last year in February 2011  he was convicted for possession of a weapon during commission of a crime, possession of an automatic handgun, possession with intent to distribute and cds on school property, with $125,000.00 bond. In May 2011 he was arrested for driving while his license was suspended and then in December was actually arrested for suspicion of making terrorist threats – he made threats to kill and harassed the neighbor and his bail was set at $46,500. At some point this man-child must realize that his criminal acts have to come to a stop, it’s not a good look and it’s immature.

Yandy meets with her mentor Mona Scott Young, who she doesn’t listen to in regards to the advice about her business relationship with Jim. Mona Scott Young owns Monami Entertainment which produces Love and Hip Hop.