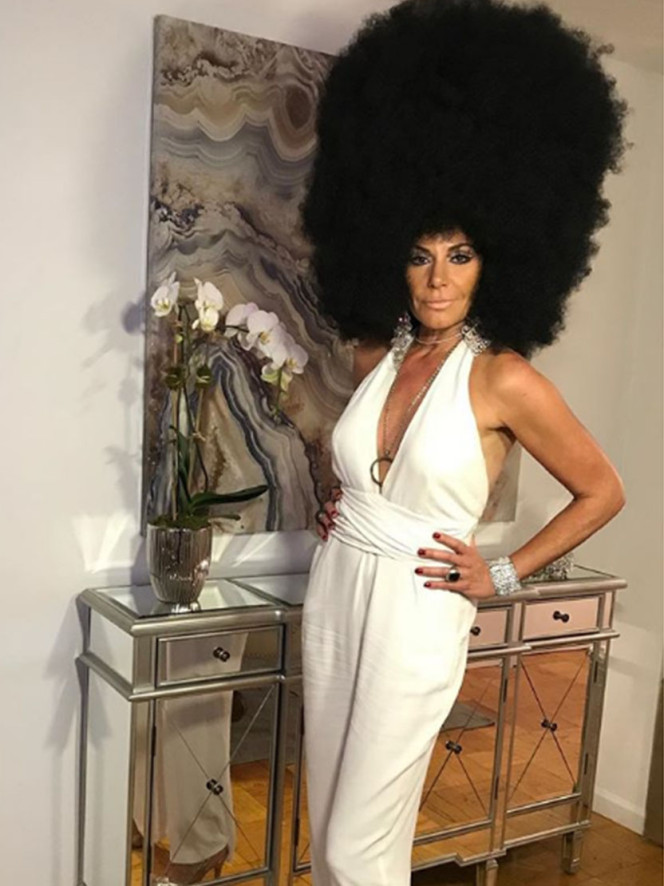 The newly divorced Luann de Lesseps stepped out as Diana Ross on Wednesday’s premiere of  the Real Housewives Of New York marking her first appearance on the series following her summer split from Tom D’Agostino after seven months of marriage.

Wearing a white jumpsuit and a dreadful over bouffant-ted wig, Luann’ look at co-star Dorinda Medley’s Halloween party raised a few eyebrows from castmates because of what appears to be dark makeup on her skin.

“I’m Diana Ross because she’s fabulous. Tom is not in tow, so I’m feeling liberated. It’s been a while since I’ve felt my girl power,” de Lesseps proclaimed during her confessional interview.

“Something’s a little off about Luann’s costume. I think she’s tone-deaf when it comes to cultural stereotypes. She’s generally tone-deaf anyway” Carole Radziwill, 54, told the cameras.

Bethenny Frankel said, “Luann’s got the balls of a burglar. You’ve gotta give it to her. She gives zero f—ks, well, I take that back.”

Before the show’s premiere Luann said: “I had makeup on, but not anything that would make me look– I had like, tanning cream on. I think that the tanning cream, and the big hair piece I have, which was amazing… I was doing my version of Diana Ross,” Luann told ET.

While she added she “wasn’t at all worried” about how her look might be interpreted, she did offer an apology.
“I was being an impersonator for Halloween. I didn’t mean to offend anyone by being Diana Ross for Halloween, it just didn’t even kind of enter my mind … I wasn’t at all worried about that, and all of a sudden it became a thing,” she said. “I’m so sorry. I don’t want it to be a thing, so I apologize if I have offended.”

Luann is coming off a normal few months. After her divorce in August, the “Money Can’t Buy You Class” wannabe singer was arrested in December for disorderly intoxication and assaulting a police officer in Palm Beach, FL. She later checked into rehab.

A rep for Luann did not immediately return our request for comment.