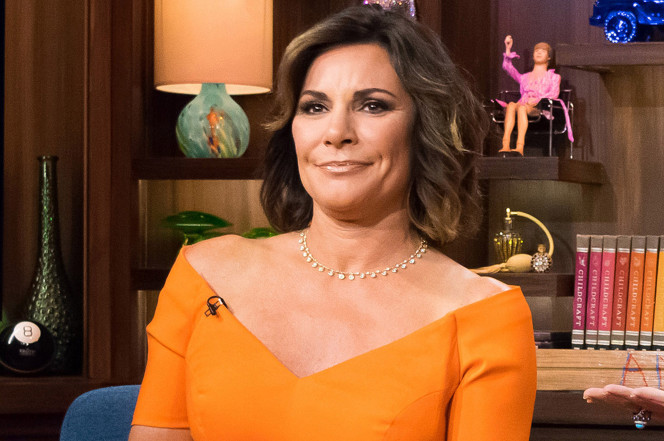 A longtime friend of “The Real Housewives of New York” star Luann de Lesseps on Tuesday offered a cryptic clue to the identity of the man who was in bed with de Lesseps before she got busted in a drunken attack on a Florida cop.

Olson, 53, said she was chatting with a female pal when de Lesseps and the mystery man left the Colony hotel bar Saturday night.

About 15 minutes later, Olson said, the man re-appeared and asked Olson to help out de Lesseps, who “wouldn’t understand she was in the wrong room.”

“I think I got there a little too late, when the damage was done,” Olson said.

A Palm Beach police report says de Lesseps, who was registered to stay in room 327, was busted following an incident that began when de Lesseps and the man entered room 407 while a maid was turning down the bed.

A security guard later found the two in the bed, but de Lesseps refused his repeated requests to leave, the report says.

Olson disputed a portion of the report that says she was in the room with de Lesseps when cops arrived around 9:20 p.m., insisting she only got as far as the hallway outside.

“They’re missing the part where I came up to help. That should have been there,” Olson insisted.

Olson, who said she lives in an apartment in the hotel, also denied that she “smelled of an unknown alcoholic beverage, had slurred speech and appeared to be highly intoxicated,” as described
in the report.

“It was so early in the evening. I was fine,” she said.

Olson described de Lesseps as “in shock” over her arrest for allegedly slamming a bathroom door in one cop’s face and screaming “I’m going to f–king kill you” as she was hauled off to the police station.

She’s charged with four felonies, including battery of a law enforcement officer and resisting an officer with violence, a misdemeanor charge of disorderly intoxication.

“We’re going to take this and turn it into a positive,” Olson said.

“There’s got to be a silver lining.”

De Lesseps has publicly apologized for her antics and blamed “long-buried emotions” brought up by her first visit to Palm Beach since her short-lived marriage to Tom D’Agostino Jr., whom she wed there on Dec. 31, 2016.