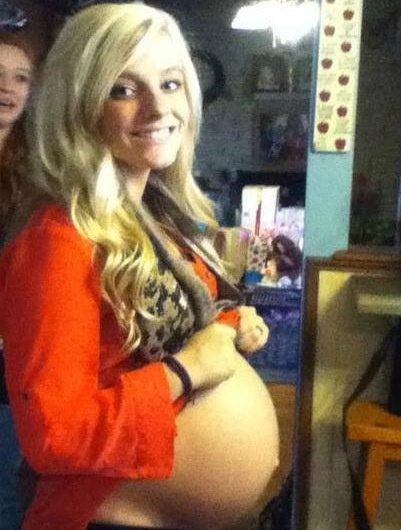 “Teen Mom 3” star Mackenzie Douthit has had an extremely rough pregnancy. The 19-year-old suffers from Type 1 Diabetes and requires daily blood sugar checks. In the beginning of her pregnancy she broke her ankle requiring hospitalization and a cast after her blood sugar bottomed out and she fell down the stairs. She was also attacked by a crazed fan and dragged across concrete on her stomach but luckily she and the baby were unharmed. On Friday, January 30th Mackenzie’s mother, Angie Douthit tweeted the news that Mackenzie had been hospitalized yet again saying: “At hospital with Mic! Trying to stop low blood sugars. Hoping to keep baby girl in for at least another week!” Recently Mackenzie ranted on her official Facebook page about her local doctors and the care she was receiving:

“To go on a little rant as everyone knows im about to have a baby girl and as everyone also knows im a brittle type1 diabetic and very high risk pregnancy. that being said I have to see a diabetic specialists along with a regular baby doctor. The nearest one was a guy named doctor Thomson in joplin. My first visit I was sick and running a little late and told them I wasnt feeling good and the lady said “well your Twitter says your going to the fair tonight so your lying’, so I ignore it and go on to tell her I have a lot of trouble with my disease and I eat VERY healthy and still have to take a lot of insulin and her reply was ‘I don’t believe that’. So I go one and continue to see him and her and multiple times I’d tell them my sugar dropped even when I ate and what they could do to help and they told me and my mom both “that’s a lie, she didn’t eat” so about two months ago the lady calls me and says I need to take more insulin and I kindly said, ‘I can’t take more my sugar is dropping and im eating a lot’, her reply “your a liar cause two weeks ago your facebook status said you didn’t have a appetite’, I asked her to please just help me out with my disease like a doctor should and please stop stalking my fb and twitter. She than starts yelling at me along with three others in the background saying they can look at my social media if they want. And then put doctor thomson on the phone to tell me they are dropping me and won’t see me anymore. I rushed to my moms work crying and she called and they hung up on her and sent us a letter saying they dropped me. Ok is it me or is that very unprofessional? ?? Here I am about to pop and having the worst blood sugars not knowing if my daughter is gonna be ok because they did this and I have no diabetic care. Anyways please pray for me and baby girl.”

Mackenzie is currently 36 weeks pregnant. Mackenzie and husband Josh McKee are parents to a two-year-old boy named Gannon. Mackenzie received criticism when she announced that she was pregnant again but she defended herself by saying that doctors told her she wouldn’t be able to handle any more pregnancies after the age of 21-years-old. What are your thoughts? Post your comments below.