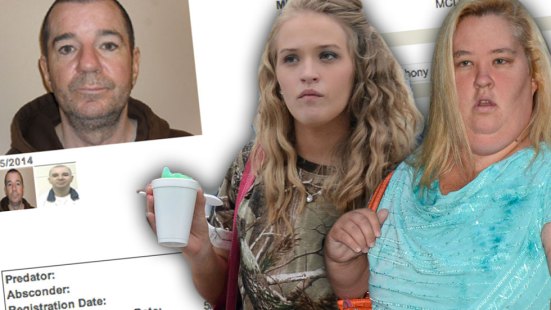 via Radar Online:
Former Here Comes Honey Boo Boo star Mama June Shannon’s child molester then-boyfriend sexually abused her daughter, Anna Cardwell, for at least six months when she was just 8 years old. But the terrified little girl didn’t come forward until nearly a year later. And now, RadarOnline.com can reveal why. According to court papers obtained by Radar, Mark McDaniel, 53, took extreme, sick measures to prevent his innocent victim from telling anyone about his disgusting behavior in 2002.

“Anna had told a teacher…she had been molested by her stepfather Mark McDaniel,” the officer wrote.

The teacher than contacted the school counselor, who called Cardwell’s grandmother, Sandra Hale. (Hale had primary custody of her grandchild, though Cardwell frequently visited her mother and McDaniel’s Griffin, Georgia trailer park home.)

“Anna stated that Mark told her not to tell because he would not like her anymore,” Beach continued. “Anna advised she got tired of holding it in and had to tell.”

“Anna told me that McDaniel threatened that if she ever told her grandparents what happened to her, he’d kill them and her,” Cardwell’s ex-boyfriend Caleb Clark told The National ENQUIRER in 2012. “That’s how he made her shut up about the rapes.”

McDaniel was indicted in Spalding County Superior Court for rape, child molestation, aggravated child molestation, enticing a child for indecent purposes and aggravated sexual battery. After taking a plea deal, the pedophile was sentenced to 10 years in prison. He was released in March 2014.

Though she denied recently associating with McDaniel, June, 34, was caught on camera hanging around her vile ex after his release this year.

“I believe she is seeing him and hanging around him,” Cardwell exclusively told Radar on Friday, confirming she had been a victim of his crimes. “I’m hurt.”

June posted on facebook:
“I want to make a post trying to clear up the rumors remember you can’t believe everything you read! Ppl sell stories to the tabloid everyday that r false! It isnt true i promise my kids r #1 priority over anything else and I would never put them in danger period over this or anything else they r my life this is my past I left him 10 yrs ago for it and I wouldn’t go back.”