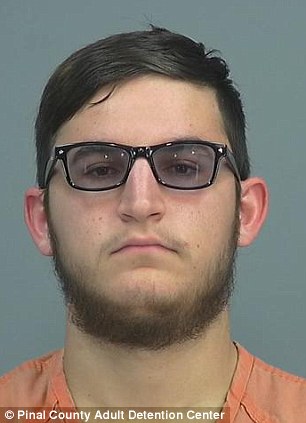 via AZ Central:
Pinal County Sheriff’s detectives have arrested an 18-year-old man accused of engaging in sexual misconduct with a 4-year-old girl in San Tan Valley.

Sheriff’s detectives were first alerted Tuesday by Child Protective Services after the agency received a call on its hotline alleging that Dalton Cole, 18, had sexually assaulted a young family acquaintance, according to a Sheriff’s Office statement issued Thursday.

Detectives determined there had been sexual contact between Cole and the child on two occasions within the last six months after interviewing the 4-year-old, according to the statement. Cole was interviewed by detectives that afternoon and corroborated the account given by the victim, the Sheriff’s Office said.

Cole was booked Tuesday into the Pinal County Adult Detention Center on suspicion of sexual misconduct with a minor and committing a dangerous crime against a child. He is being held without bond, authorities said.