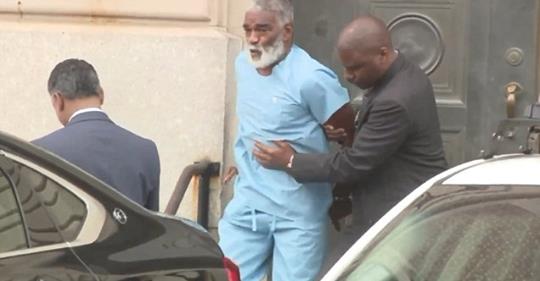 Clarence White was arrested for shooting his wife in the face

Officers were called at about 8:30 a.m. to their home on Glebe Avenue.

The couple, have been married for three years and have a young daughter.

A neighbor said that at about that time, he heard them yelling, told the newspaper: “It was a normal argument. They were arguing (outside). He went inside and she followed him,” a neighbor stated.

That was the last time White’s wife was seen. When police arrived, they found her suffering from a gunshot wound. She was rushed to a hospital where she is listed in critical condition.

The neighbor told police the two had been arguing in the hours before the shooting.

They had suffered money problems since White had lost his job recently and during the argument, his wife had told him to pack his bags and leave.

He found a gun and put it in his pocket, but tried to reconcile with her when she told him he didn’t satisfy her sexually or financially.

Police sources told the Daily News that White claimed he just wanted to scare her and didn’t mean to shoot her.

White faces charges of attempted murder, assault and criminal possession of a weapon. He is being held on $300,000 bail.

The couple has a history of domestic violence. Police arrested White in May for allegedly assaulting his wife. The couple have a young daughter together.