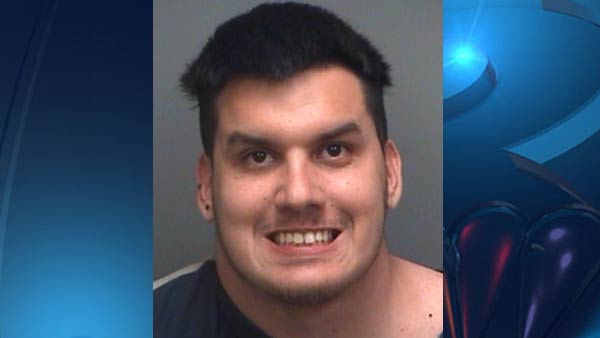 via WFLA:
A man has been arrested for murder after deputies say he decapitated his mother at the family’s Oldsmar home on New Year’s Eve, all because of a chore he didn’t want to complete.

Investigators responded to the home Wednesday at 7:24 p.m. where they found the decapitated body of the victim, who deputies say is Gomez’s mother, 48-year-old Maria Suarez-Cassagne.

According to Pinellas County Sheriff Bob Gualtieri, Gomez hit his mother over the head with an axe, then cut her head off in the garage and dragged the body to the garbage outside the home.

The Sheriff says Gomez had been planning his mother’s murder for two days.

According to investigators, Gomez was angry over his mother “nagging” to put boxes away in the attic.
Gualtieri says Gomez admitted he put his mother’s head in a garbage can outside the home and then attempted to put her body in the garbage, as well, but it was too heavy. Cassagne’s body was found by her older son, Gomez’s 26-year-old brother, Mario Gomez.

The brother was home at the time of the crime, but thought the noises he heard was Gomez putting the boxes away.

“He went to the garage, he found an axe laying on the floor,” said Gualtieri. “He found a blood trail and he followed that outside to the side of the house and when he went outside, he found his mother laying there on the ground next to a trash can, and unfortunately his mother had been decapitated, so he immediately called the sheriff’s office.”

Gomez had left the home by the time deputies arrived, but was found riding his bike just several blocks away a short time later. A brief chase ensued and Gomez was taken into custody.

Sheriff Gualtieri confirms Gomez was diagnosed with schizophrenia and prescribed medications, but it’s unclear if he was taking them.

A relative told NBC News that she believes Gomez was “a good person” whose illness overwhelmed him.

“She was a really good mother,” the relative said of Cassagne. “And Christian was normal until like age 20 — I think when he was diagnosed.

“It’s so confusing what happened,” she said. “It’s scary.”

“He was upset because his mother for the last couple of days had been trying to get him to put these boxes in the attic and because he was mad at her for telling her to put these boxes in the attic, he planned her murder for two days,” said the Sheriff. “In a very calm, cool way, he explained what he did, why he did it and what happened and by talking to him, you wouldn’t know he had any mental illness…that’s very scary.”

Gomez also told deputies he was also angry at his mother because he felt she favored his brother more than him.

Gomez has prior arrests in Pinellas County for loitering and prowling, resisting officer without violence, and disorderly conduct.
The investigation is ongoing.

Georgia Police Chief Tells 911 He Accidentally Shot Wife In Bed; Wife In Critical Condition; No Charges Have Been Filed