The former wife, Stacie Catron, 36, of Rodney Wilson, (pictured below), wants her ex-husband to get the death penalty as he fatally shot her father. Rodney Aaron Wilson, 38, was arrested Friday for murder in the shooting death of Rickey Lee Harlin. Mr Wilson is being held in the Adair County jail without bail. No charges had been filed Monday. Miss Catron, said she thinks Wilson shot and killed her father because the two men “were involved with the same woman.”

Mr Wilson was also arrested and charged in November 2000 with the shooting death of his stepmother, Theresa K. Wilson. Reports state Theresa Wilson died in the front seat of a pickup from a gunshot wound after a dispute with her stepson. Adair County court records do not reflect if Rodney Wilson’s case went to trial. Catron said charges were dismissed against him and the record was expunged. Published reports about the case state a note signed by Theresa Wilson before her death implicated her husband, Dale Wilson, in her death. Dale Wilson died March 22, 2001. 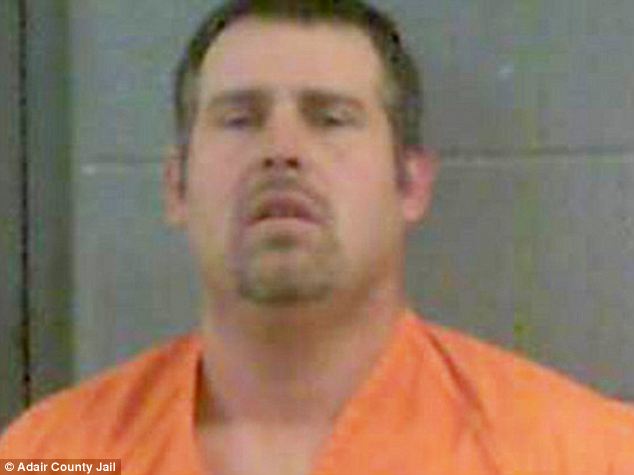 via 5 News Online:
A Stilwell, Okla., man has been jailed on suspicion of shooting and killing a man in Adair County, Okla., on Friday (Dec. 27). Rodney Aaron Wilson, 38, phoned 911 about 6:30 p.m. on that date to report he had shot Rickey Lee Harlin, 53, at Harlin’s house in self-defense, according to Adair County Sheriff David Hardin. When deputies arrived at Route 5, Box 1866, near Stilwell, Harlin was found dead in front of his house.

“When I arrived both vehicles were sitting in the drive,” the sheriff said. “I don’t know whose vehicle it is, but there was a Tahoe and Mr. Wilson’s truck sitting behind it, and I did notice Mr. Harlin, the deceased, lying on the ground in front of Mr. Wilson’s truck.”

Two women were also at the house during the time of the shooting, the sheriff said. The Oklahoma State Bureau of Investigation was called in to work the case. Investigators with the OSBI arrested Wilson at the site, according to a news release. Wilson was booked into the Adair County jail and faces one count of first-degree murder, records show. The OSBI hasn’t released an arrest affidavit, but the Adair County District Attorney’s Office has received a preliminary report.

“I previously viewed an affidavit from the OSBI and made a determination that there was probable cause to hold suspect Rodney Aaron Wilson on an anticipated charge of first-degree murder,” said Joshua King, assistant district attorney.

Wilson had a bond hearing Monday (Dec. 30), and Judge L. Elizabeth Brown ordered him to be held without bond until Jan. 9. Harlin’s family members said the two men were involved with the same woman. Wilson has a 15-year-old son, Rodney Wilson, who is also the grandson of Harlin. The teenager lived with his grandfather but said he wasn’t at the house when Harlin was shot. He said his father and grandfather did not have a violent past. The teenager said his grandfather raised him.

“He showed me everything I know, how to work, how to do anything, ride a horse, build something, and I learned how to respect people,” he said.

In 2004, Wilson was convicted of possession of a controlled substance, according to the Oklahoma Department of Corrections.