Man, laid to rest next to twin brother he stood trial for killing 6 yrs ago… days after he was accidentally shot 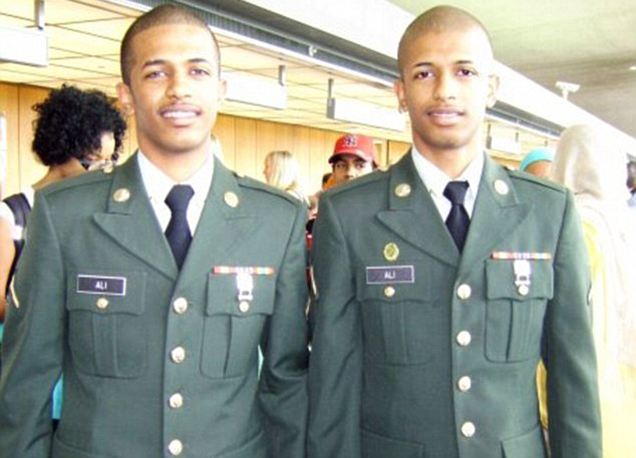 via Washington Post:
Wasel Ali was born first and buried first, six years ago in a cemetery outside Baltimore. His identical twin Wael was born second and buried second, on Tuesday, right next to his brother. Wael’s funeral took place less than two years after he stood trial for killing his 19-year-old brother, who was found asphyxiated in a field not far from the Mall in Columbia in 2007. Jurors could not agree on a verdict.

On Friday night, Wael, 25, was killed outside Atlanta, where he’d moved to rebuild his life after his brother’s death. Police said a friend of Wael’s accidentally shot him in the front of the neck — the same location as his brother’s fatal injury.

“It is hard to overlook the coincidence in both brothers losing their lives in a tragic and untimely way,” said David Zwanetz, one of the lawyers who represented Wael at his trial. “Wael and Wasel shared everything in life, and I found it deeply moving to know that they will share a plot and lie next to one another for eternity.”

He described the funeral, which he attended, as highly emotional. “No child should ever pass before his or her parents, and in this case my heart is broken for the Ali family,” he said. “Simply broken.”

“As of today, the case is still active, but in light of recent events, it will be reviewed,” she said.

Wael and Wasel slept in the same beds as children. Their names were separated by just one letter. They often got sick at the same time. The boys idolized their father, particularly his military service, and they eventually signed up for the U.S. Army after graduating from Wilde Lake High School in 2006. They wanted to be military police officers. But trouble was brewing. After basic training, the twins allegedly stole an Army vehicle from Fort Meade, Md. They were arrested after using it while trying to pull over a vehicle on Route 29.

“We just made some wrong decisions,” Wael said in the 2012 story. “We got mesmerized by the whole being-in-uniform thing and being in the Army.”

They left the Army and moved back in with their family in Columbia. Wasel worked at Banana Republic. Wael sold cellphones. In the summer of 2007, they got in trouble again, facing charges of dressing up as police officers at Clarendon Ballroom in Virginia. A .45-caliber pistol was also found in their car.

Authorities later alleged that Wael blamed his brother for the incident and that when they got home that night they traded punches. A few days later, Howard County police raided their home on Warm Granite Drive looking for guns. The twins and their father sat on the floor in handcuffs as police tore through the home.

That evening, according to police reports, Wasel was called in to work and allegedly implicated his brother in a shoplifting scheme. Their father had sent Wael to pick up Wasel at the mall, but Wasel never came home. A few days later he was found dead in a wooded area where the twins used to hang out with friends.

After his brother’s death, Wael eventually moved to the Atlanta area and enrolled in college, studying criminology. Back in Howard County, a cold-case detective picked up the case, and, after police interviewed Wael, authorities decided to charge him. He was arrested in the middle of the night in September 2011 while studying for exams.

At the trial, prosecutors alleged that Wael had picked up his brother that night from the mall and had driven him to the wooded area, where he killed him with his own hands. The cartilage in the bottom of Wasel’s neck had been broken. But they conceded that the case lacked physical evidence.

“We don’t have DNA at the crime scene because with twins, they share DNA,” Doug Nelson told the jury. “There’s no fingerprints on the murder weapon. There’s no murder weapon.”

Jurors couldn’t reach a verdict. The votes were 11 for not guilty, one for guilty. Prosecutors decided not to retry Wael, who returned to the Atlanta area.

On Friday night, he was at a Marietta restaurant when he showed a gun to his good friend Raouf Sanad. The gun went off and Wael was shot dead. Sanad has been charged with involuntary manslaughter, Marietta authorities said.

Wael’s parents said they never believed Wael had killed Wasel — not “for one fraction of a second,” the twin’s father said in a 2012 interview.

“Everybody knew,” Wael’s mother said, “how much they love each other.”